Delivered On Time — Or Else!

Just got back from Biggest Little Fur Con, and of course we’ve got lots to talk about. But first… Udon Entertainment have released the Samurai Pizza Cats Official Fan Book in North America. What’s that you ask? Well according to Wikipedia, “Kyatto Ninden Teyandee is an anime series produced by Tatsunoko Productions and Sotsu Agency. The series originally aired in Japan on TV Tokyo from February 1, 1990 to February 12, 1991… Saban picked up the North American rights to the series in 1991, and produced an English version called Samurai Pizza Cats.” Honestly, that explanation barely cat-scratches the surface of just how weird and wonderful this series was. Fan interest has not waned over the years, and now there’s a book all about it! “The Samurai Pizza Cats: Official Fan Book is packed with the best toppings: Pinup artwork, character designs and profiles, episode summaries, rough concepts, and exclusive in-depth interviews with the show’s creators and original cast.” Check out the preview over at Comicon.com. 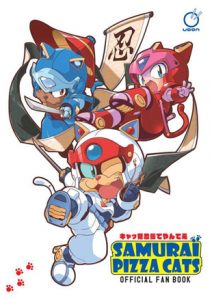