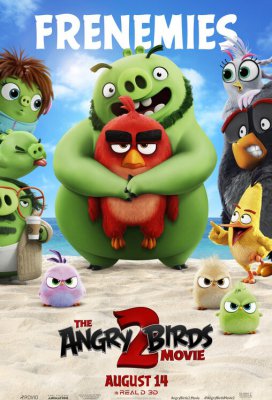 The film picks up some time after the first, maybe a few months later. We see Red, Chuck and Bomb have taken the job of protectors of Bird Island, and are in the midst of a rather intense prank war with Pig Island. After an unknown island joins in the war, making it much more lethal with giant iceballs, the characters call a truce as they realize this island wishes to wipe them both out.

We're introduced to many new characters. Courtney, an assistant pig to King Leonard. Silver, Chuck's previously unmentioned sister who while serving as the "smart girl" trope, also serves as a great comedic foil to Red's negativity. Zeta is the main antagonist of the film, the leader of Eagle Island. This means there are way more Eagles in this movie for those of you who loved Mighty Eagle in the first. It's revealed her and Mighty Eagle were high school sweethearts and were once engaged, which comes up at a rather unfortunate time.

I really like the creative use of slingshots as transit on Bird Island. It's a good incorporation of the first film and the source material. As well, the voice cast returns to do a phenomenal job with delivering the jokes. There's also a really high number of side characters giving one liners that are voiced by Youtubers and other well known figures (Mason Ramsey for instance). I love that they did that, in this era Youtubers are getting more roles in more mainstream productions and that's just cool.

So everything's set up now, the story, the conflict, the characters, but that leaves the script and the writing. This is where the film truly excels to blow past the first one and even other animated sequels this year.

The comedic chops on this film are unmatched by anything since Lego Batman. There are so many jokes every few seconds, so many recurring gags that actually land, and even side plots that are funny in their own right— much like a Scrat sequence from the the older Ice Age films.

There is also a fair share of crude adult humor that permeates this film. You'll be surprised it somehow landed a G rating when you walk out of the theater, having seen on and off screen death, what can only be described as a nude photo joke, excessive bleeped out cussing, sex jokes, yeah. This film is packing heat and it's all hilarious.

My only real negative is the last 20 to 30 minutes descends a bit more into a traditional kid's film climax than the adult joke heavy first half. But that's about all, it's still funny. The whole thing is edited like an Animaniacs episode, the timing is on point.

This film doesn't have the breath taking animation or cinematography of How To Train Your Dragon 3, or the repeated emotional beats from Toy Story 4, but it offers a more fun and entertaining theater experience. This is the film you'll be bringing friends to the cinema for and saying "it's good, I swear!" and you'll notice even more background details you missed the first time. Any joke opportunity available, this film takes.

This is a fantastic film. A wicked funny comedy that'll have your sides hurting by the end. Grab some buddies, maybe see it in the adult theater so you can truly be as loud as you should be when laughing and have a drink. I saw it sober and am still chuckling at the jokes and visual gags. Here, I'll put some out of context and you'll have to see the movie for them to make sense:

So yeah! Go see this movie. In a year destined to be known as "The Year Of The Sequel", this will be the film people will regret not seeing at the time.

It's taken a very strong run at second wide-release video game adaptation to go "fresh" on Rotten Tomatoes, and it's currently actually got a stronger score than Detective Pikachu (though with about half the reviews); it's actually quite possible that The Angry Birds Movie 2 will become the first "Certified Fresh" video game adaptation. Because of course it will.

I haven't heard a bad thing about it.

I'm a female civet! Always down for a good time, but never a cup of coffee. ;3
I am a musician and artist, as I say, a born musician and a living artist!