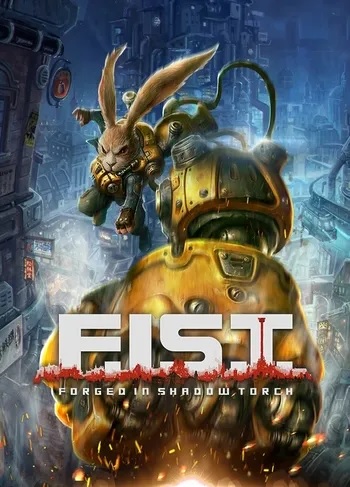 When some Western furries hear about anthropomorphic content from China they may typically think of web pages that sell knock off fursuits, but F.I.S.T. is here and gives that stereotype a good solid punch in the face. This original property developed by the Eastern developer of Bilibili for the PlayStation (4 & 5) and PC pounds in the action and exploration of any player willing to fight on behalf of the furtizens being oppressed by the Legion’s mechanical beings.

Furtizens, by the way is not my word, but the game’s own neologism describing the furry citizens. It is such a simple word, and it amazes me that of all things a game would be the etymology of it and not from popularization from furry fans (visa vi: fursona). The story’s main conflict is on two rabbit characters: Ray and Cicero.

It is one of three furry games I played released in 2021, and is certainly going on my list of nominations for this year’s Ursa Major. It is a game of two main elements that have been blended together quite well. Combat is intimate and has the feel of a brawler game of old like a more polished Double Dragon, but it takes place in an open and explorable world where your weapons can double as traversal items, putting it in the Metroid space. So it’s part brawler and part metroidvania and it blends these two elements seamlessly.

The story and environment

Ray fights for the furtizens to be free of a future of mechanization using his martial art skills with the help of three weapons: a drill, a whip, and a mechanical arm from a mech. Cicero meanwhile thinks the best future for their people is to give into technology and make it a part of their evolution. One would call such a philosophy transhumanism, but since these are furries, transanimalism?

The story is quite simple and doesn’t get in the way of the game too much. This game has some hub areas that have shops and items, so it is not an isolated feeling game such as a more traditional Metroid-like game. With that feeling, it was closer to the communal hub feeling in Ori and the Will of the Wisps than it was to Ori and the Blind Forest.

In these hub areas you can train with a red panda on performing combos, like you would in a fighter game, with moves you unlock with coins and data disks you discover as you explore. You can also visit the friendly noodle shop owner to eat and gain some overhealth. There are also other settlements in the outskirts of the city with friendly furtizens as well. The world is all interconnected and flows from biome to biome quite well. There are usually multiple ways to enter and exit areas that make perfect sense with the game’s design and help with late game item collection exploration.

The biomes each look wonderful. From the snowy mountains, military facilities, prisons, dense cities, and even the inside of a jazz club run by a mob boss of rats. I believe this to be the most variance in environment I’ve seen in a metroidvania. The 3D aesthetic on a 2D plane works surprisingly well, despite a handful of times I wondered what it would be like if I could traverse via the features in the background.

Combat is not mindless in this game, enemies each have different strengths and weaknesses that you must keep in mind when approaching them and have different attack patterns. Rarely will you be able to just kill what is in front of you with a single blow, which usually only occurs in the late game when you are revisiting the opening areas.

Bosses are in particular, exceptionally dangerous. I will say that on more than half of them I did not defeat them on the first try. They very much rely on understanding what they are telegraphing in their actions and knowing their patterns, similar to a game of Punch Out. You will need to use your first approaches to evaluate their attacks, and then even when you know what is coming, discover a counter and execute.

There is no exploit like in Claws of Furry that is going to save you here.

In my personal playthrough I found myself hitting a wall when fighting the final boss of the game, because I didn’t have enough skills or health unlocked. After spending an hour getting my cottontail handed to me, I stopped the stream for the night and came back the following week to explore and find more items to help boost my health pool and learn new skills to give it another try. That training montage of an episode was all that was needed as my rematch only took me two attempts to finally succeed. Cue the “I did it Adrean!”

The bosses were not unfair, despite any griping I did in the midst of combat. They were on the tough end of the spectrum. I say this as someone who managed to beat the Ori and Will of the Wisp finale in a few attempts.

The combat is responsive and enemies can be staggered by your blows. Every hit feels fair. The only time animations can get a bit weird is the ‘execution’ moves you can perform on weakened enemies. These did have a tendency to clip or have odd camera angles, but since they are basically just styling final blows, it didn’t harm the experience of combat overall.

If you like Metroidvanias, this is a game that will give you everything you’re looking for in the genre. It is reasonably priced, so if you can’t afford Dread, this is a good substitute. The game shows how our hobbies and entertainment have really become global in scale. A lot of effort went into the localization of this game with voice casting, and I am very glad they did so I could experience this challenging and fun romp. I look forward to seeing what the studio will do in future titles.

I must note this as a final item. This game can be played with a keyboard, but it has no mouse support, even in menu screens. You may find the experience easier with a gamepad, as navigating around with just the keyboard can be a bit clunky at times. I just like to suffer it seems by always sticking with the keyboard and mouse, as some gamers who watch my stream have jibbed. You may not want to though, so I’d suggest a controller if you have one.