Writer and artist Ian Jay refers to his on-line black & white comic Crossed Wires as an “anthro cyberpunk hacker romance action” story.  We’d be hard-pressed to find a better description! Visit his official Crossed Wires page to see what he means. While you’re at it, take a look at his on-line store. There you will find (among other things) collections of Ian’s previous anthropomorphic comics, including Epiphany and Megahertz. 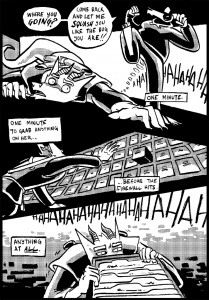 Last Res0rt, a webcomic following the adventures of a young vampire fur on a futuristic reality show, has released a 30-page prototype of a tabletop RPG based on the comic.

The game contains additional backstory on the Last Res0rt universe, and provides a primer to play as one of six available species (five furry/scaly species, as well as humans), plus supernatural variants such as Djinn, Zombies, Celeste, and – of course – vampires.

The printed version of the game is expected to contain several more pages of content, as well as changes suggested by readers and players.