War With the Newts is a theatrical adaptation of the satirical novel by Karel Čapek, who is known for popularizing the word "robot" through his play R.U.R. It was adapted by Professor Natsu Onoda Power and performed at Georgetown University.

The play consists of a series of vignettes depicting the events surrounding the uplifting of a species of hyper-intelligent newts. When they are first discovered, they are seen as an able-bodied workforce, but gradually they begin to see how they are being enslaved by humans, and rise up in revolution. The newts were portrayed by actors wearing kigurumi newt suits and fingerless arm-gloves, and they frequently stole the show from the human actors. I had the opportunity to see the play in its world premiere run at Georgetown University. For a new play, this had a remarkable level of polish, while at the same time being eclectic, energetic and engaging.

Turn into a Newt! It’s Better.

Gud Fit Entertainment is a rather new comic book company which produces colorful comic books and on-line comics with young readers in mind — but everyone is certainly welcome to check them out. Among their current titles is Dorse and Doose, the story of a horse (Dorse) raised by a dog (Doose) trying to find his way living on a farm. More along the traditional comic book line is Super Newts, the story of Cool and Cute: Two super-powered amphibians sworn to protect the inhabitants of Amphibiland from all dangers. Check out the Gud Fit web site to find out more about these and other upcoming projects. 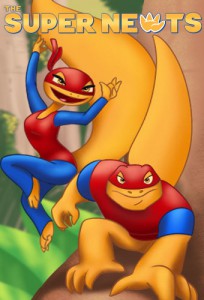