Back from San Diego Comic Con, and we have SO much to tell you about! First up is Moos Miht, a black & white independent comic book series written and illustrated by Joshua Warner (and published by Hanging Chad Entertainment). It follows the adventures of a young adult moose living in Detroit who discovers that he is the son of a famous superhero, Mighty Moose — and several international crime organizations are after his hide because of it! According to Mr. Warner it’s less of a “spandex adventure” than a “noir crime drama” with animal characters. Decide for yourself: Visit the preview page at Comic Book Trailers. Recently, the first five-issue story arc has been collected into a trade paperback graphic novel. 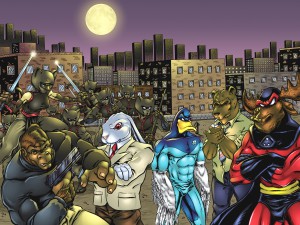