The Bear and Mouse Come To America

Big news from our friends over at Cartoon Brew, especially if you’re a fan of traditional animation: “Indie animated feature distributor GKIDS has announced that the highly anticipated hand-drawn French film Ernest and Celestine will open in New York and Los Angeles on March 14, 2014. That will be followed by national expansion to all major US markets. GKIDS has qualified Ernest and Celestine for the Academy Awards this year in the film’s original French language with subtitles. The American release, however, will be dubbed with a voice cast that includes Forest Whitaker, Lauren Bacall, Paul Giamatti, William H. Macy, Megan Mullally, and Nick Offerman. The small New York-based distributor has experienced fantastic success at the Oscars during the past five years by countering the big studios with quieter, more personal hand-drawn fare. They have earned nominations for three of their features: The Secret of Kells, A Cat in Paris, and Chico & Rita.” Check it out next year. 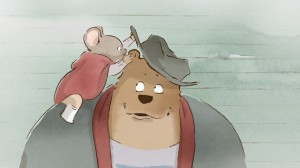 And with that, we wish you all a Happy Thanksgiving. Needless to say, you have our THANKS for reading this regularly! We appreciate your company.

My sister Sherry and I went to a GKids publicity screening of "Ernest & Célestine" in North Hollywood on November 18. It was in French with English subtitles; GKids is still completing its dubbing of the whole movie for its American release. I loved it; Sherry didn't. I think that most Flayrah readers will like it very much. The ending is a bit simplistic, but it is based on a book for little children, although the movie is successfully for all ages.