Word has gotten around that Dreamworks Animation has pulled a switch: The aliens-land-on-Earth comedy Home, originally scheduled for release this winter, has been pushed back to 2015, while the Penguins of Madagascar movie has been moved up to this coming November. To that end Dreamworks has just released the first trailer for the penguin movie. It seems that our military-style black and white team meets up with a secret agency known as The North Wind, a collective of high-tech armed animals from the arctic. The film is directed by Eric Darnell, who of course directed all three of the Madagascar movies. Fine, fine, but what we wanna know is: Will Marlene the otter be in the movie too?? 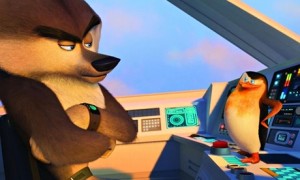