The Raccoon on TV!

Rather quickly after the release of the Guardians of the Galaxy feature film this summer, Marvel put out word that an animated TV series was in the works — but that was about all we heard for a while. Now, Marvel has gone so far as to release a “splash page” image and even a short animated “teaser” for the new show, which is slated to premier in 2015. The characters (including fan-favorite Rocket Raccoon) all have the appearance they did in the movie, but there’s no word yet if any of the film’s actors will be voicing their characters for the show. Nor do we know if what we see in the teaser reflects the look and animation style of the actual show. But, it’s more than we had even a month ago! Read all about it over at Slash Film. 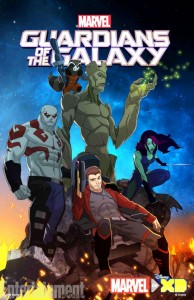