Bringing it all around home again, Marvel Comics have announced a new tie-in comic book series based on the animated TV series based on the hit movie based on the comic book: Guardians of the Galaxy. Star Lord and his companions (and we know which two companions you’re watching the closest!) are back in a new 4-issue full-color miniseries. Interestingly, they actually tell us ahead of time that the artwork is primarily screen-captures from the upcoming animated series on Disney XD. Now if only they’d tell us more precisely when the new TV series will premier! Anyway, the comic book miniseries begins in February, adapted by Joe Caramagna. Read an interview with him over at the Marvel site.  “Oh… yeah…” 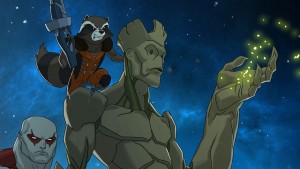