They Will Change the World of Dragons

Here’s another one of those “how did we miss this?” young-adult fantasy book series. Tui T. Sutherland is part of the author collective that, under the name Erin Hunter, created the Seekers and Warriors series of cat-based fantasies. In 2012 though, she returned to her own name to bring us the Wings of Fire series, beginning with The Dragonet Prophecy (published by Scholastic, Inc.) “The seven dragon tribes have been at war for generations, locked in an endless battle over an ancient, lost treasure. A secret movement called the Talons of Peace is determined to bring an end to the fighting, with the help of a prophecy — a foretelling that calls for great sacrifice. Five dragonets are collected to fulfill the prophecy, raised in a hidden cave and enlisted, against their will, to end the terrible war.” As you can well imagine, things don’t turn out as planned when the five young dragons escape. Their adventures have thus far lead us through six books in the series, and at least two more books are being written even now. Check out the first book over at Barnes & Noble. 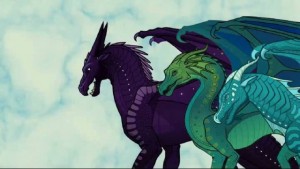 the books are amazing please sent me the third book