The winners of the 2008 Ursa Major Awards were announced this weekend at All Fur Fun 2009 in Spokane Valley, Washington.[1]

Nominees and award winners were chosen by popular online vote. Over 270 ballots were received from 16 countries for the final vote — an 34% increase over the previous year.[1]

The Ursa Major Awards were created in 2002 to celebrate the best works in the field of anthropomorphics, following a similar award for the "Best Anthropomorphics of the 20th Century", held at ConFurence 12 and covering live action and animated movies and television series.[2] 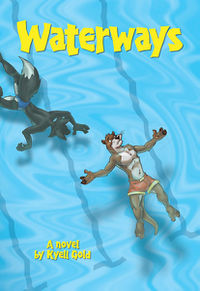 Waterways is Kyell Gold's third award-winning novel, after Volle (2005) and Pendant of Fortune (2006)

In the months prior to the awards, controversy arose over the nomination of Softpaw Magazine and spinoff Finding Avalon for Best Magazine and Best Comic Book. Furry podcast KnotCast criticized the choices, receiving in turn "overwhelming" feedback[3] defending the works' right to be nominated in a popular award.[4][5] German-based Eurofurence, which previously banned Softpaw, considered withdrawing from the Awards.[6]

Concern was also raised over the domination of Best Short Fiction by Kyell Gold (who won four nomination slots[7] — a feat previously achieved by E.O. Costello in 2005[8]), and of literary nominations generally by Sofawolf Press.[9]