In the “about bloody time” department: Word is out that Gon, the globally-popular manga by Tanaka Masashi, is finally being made into a CGI animated TV series. Gon, if you’ve been living under a rock and don’t know (or perhaps if he threw one on top of you) is a miniature dinosaur-like creature of tremendous speed and power. He lives in the animal world, and always seems to be getting into fights (comical, but still…) with other animals over simple matters like food and territory. Interestingly, this famous Japanese manga is being brought to television by an animation house in Korea, Daewon Media, with the help of the Japanese publishing house Kodansha. There’s a preview video up on YouTube which shows footage that was displayed recently at the TV trade show MIPCOM. The show is all set to premier in Japan and Europe early next year, with the rest of the world hopefully to follow soon after. 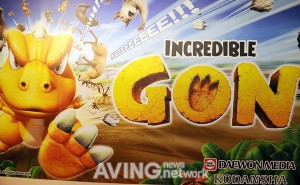