ASIFA-Hollywood just announced the nominations for the 2021 Annie Awards — known far and wide as “the Oscars of animation”. As has increasingly been the case the last few years, more and more anthropomorphic stuff has made its way to the top of the animation list! And 2021 was no exception. No less than three anthro films are up for Best Animated Feature, including Raya and the Last Dragon, Luca, and the recently released Sing 2. In fact Raya is one of the most honored films of the year, with nominations in Character Animation, Character Design, Effects Animation, Voice Acting, Music, Production Design, Storyboarding, Writing, and Editing also (whew!). Luca is not far behind, with nominations in Character Animation, Character Design, Music, Voice Acting, Writing, Editing, and Directing. Vivo has five nominations in various categories, while Wish Dragon and Spirit Untamed have one each (for Character Animation and Storyboarding, respectively). Over in the TV and Streaming categories, it’s more of a mixed bag. Best TV Show For Preschool includes Odo, Stillwater, and Muppet Babies (which is also up for Writing). Amphibia is up for Best TV Show For Children (as well as for Directing and Editing), while Tuca and Bertie is nominated for Best General Audience TV Show (and also for Writing). Arlo the Alligator Boy scored noms for Production Design, Voice Acting, and Editing, and Centaur World has one nomination for Voice Acting. In Sponsored Production (the new way of saying Best Commercial) there’s Featherweight (the music video by Fleet Foxes) and Tiptoe and the Flying Machine (from Macy’s). Finally, Ratchet & Clank: Rift Apart is nominated for Best Video Game. Visit the Annie Awards web site to see the full list of nominees — and don’t forget, nominations for the 2022 Ursa Major Awards will open soon! [We wish you all a Merry Christmas, a Happy Solstice, and a Blessed Holiday Season.] 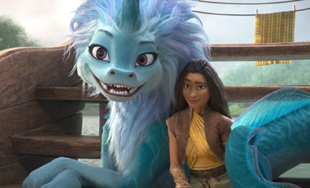 I'm glad Wish Dragon is getting some attention in there! The story's not anything special and it's not high-end computer animation, but it's got heart and humor and I wish Sony had done more to promote it. Without relying on Internet memes, it'll age much better than Mitchells vs the Machines.

I wish Sony AND Netflix had done more to promote it.

Might as well do a short awards round up here, but neither My Little Pony: The Next Generation or Space Jam: A New Legacy were submitted to the Academy for consideration for the Best Animated Feature Oscar. The former is following in the footsteps of My Little Pony: The Movie (Next Generation never got a theatrical release, but that doesn't disqualify it this year due to the pandemic); I thought Netflix might at least submit it this time, but seems like the writing was on the wall and there is absolutely no need to try and boost the number of submissions anymore to get the max five nominee count.

Space Jam: A New Legacy seems to be disqualifying itself as an animated movie; I don't think they'd actually have any problem under the current rules qualifying. Warner Bros. probably also saw the writing on the wall.

Other than that the frontrunner seems to be Encanto, though history of the category says Luca should win sight unseen. If there's an original Pixar movie, it wins, automatically, never mind if it's actually a weaker movie; however, it might get knocked for also never really even getting a token theatrical release. Of course, that didn't hurt Soul, but then Soul was a better movie, plus the pandemic was in a much worse state last year.

Raya and the Last Dragon probably got knocked out of real contention for the win early on; going out early is not a death sentence for this category. However, unlike it's nearest comparison, Zootopia, it wasn't a massive hit that also hit the zeitgeist hard. In fact, when it's opening box office was below Tom & Jerry's, it got a reputation as a bit of a box office bomb. The fact that it wound up having decent legs for a pandemic movie and ended up doing about as good as it could, all things considered, kind of got lost. However, it's showing at the Annies up there has proven the kind of people who nominate these kinds of things pay attention, at least, so it went from an iffy Oscar nom to near certain. Of course, not super surprising for a Disney movie (and the lack of a Director nomination is eyebrow raising).

Also, Kelly Marie Tran's performance was great, but if you're only going to nominate one voice actor from Ray and the Last Dragon and it's not Awkwafina, what are you even doing?

As it is nominated for so many things, Raya might well walk (swim?) away with some of the techie awards, given that it's such a beautiful and well-made film. And I totally agree with you about Awkwafina!