Late in May there’s something definitely new and different coming down the pipe from Ape Entertainment. It’s a full-color softcover graphic novel called Dino Duck: Prehysterical. How best to describe it? Hmm, we better let them do it: “The race up the evolutionary ladder is on! But the only duck in the Duck Tribe who knows it is Dino! With the monkeys watching and copying his every move (and his fellow tribesman ignoring him completely), it’s up to Dino to drag his people out of the stone age and into evolutionary superiority before the monkeys beat him to it!” The man behind it all is writer and artist Jay Fosgitt. Check it out over at Things from Another World. 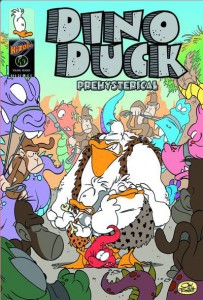 Coming from a company called Ape Entertainment... I think he's going to find that task a tad more difficult.