Friend to Elves and Animals

The Ascension is a fantasy novel series by J.A. Guinta. The Last Incarnation, first book in the series, was published last year by Brick Cave Books. Here’s the publisher’s description: “The son of a trapper, raised by elves, befriended by animals, entrusted with magic, Barr was but a boy on a journey that had taken many, many lifetimes. Seeking to avenge his father’s death, he would cross into Lumintor, home to shapelings of all manner and size. Little did he know, Revyn, the God of Change, had plans of his own, plans set in motion long before Barr was ever born. It was what Revyn had been waiting for, the time when one of the new races bore a child on its final lesson, a soul on the verge of enlightenment.” This is a link to find The Last Incarnation on Amazon. And that, my friends, is one Big Dog! 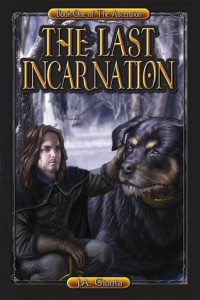