One of the most famous furry comics out there at the moment is Mouse Guard by David Petersen. This sword-and-sorcery tale (tail?) has already spawned collections, role-playing games, and a devoted following. Now and then, Mr. Petersen allows some of his friends to try their paw at the Mouse Guard characters and situations — and some of the best in the business came calling. After the first go-round’s success, Archaia Entertainment have announced that Volume 2 of Mouse Guard: Legends of the Guard will be released as a full-color 4-issue miniseries, starting this May. “Contributors to issue #1 include Stan Sakai (Usagi Yojimbo), Ben Caldwell (The Dare Detectives!), and the team of writer Nick Tapalansky and illustrator Alex Eckman-Lawn (Awakening). Subsequent issues will include contributions from Christian Slade (Korgi), Rick Geary (The Adventures of Blanche), Jemma Salume (Unicorn Life Cycle), Jackson Sze (concept art on films like The Avengers and Iron Man 3), Cory Godbey (Fraggle Rock, the upcoming Jim Henson’s Labyrinth), Eric Canete (Fear Itself: Spider-Man), C.P. Wilson III (The Stuff of Legend), Bill Willingham (Fables), and fantasy illustrator Justin Gerard.” After the mini-series is completed, the whole thing will be released as a hardcover graphic novel this fall. 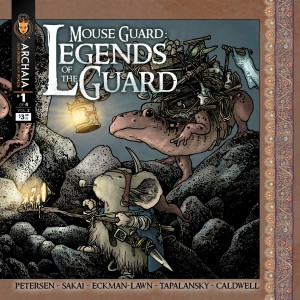