The Mouse Guard Were Young Once

For several years now David Petersen (creator, writer, and artist of the award-winning Mouse Guard series) has annually been putting together an illustrated fable from the Mouse Guard universe for Every hero was once a child, listening to stories of the heroes who came before them. It is the same with the Mouse Guard. Six mouse fables are spun to a few familiar young furs, reminding us all to be brave, stay true to ourselves, and follow our hearts. Brand new stories include ‘Service to Seyan,’ set in the land where Mouse warriors travel after death, and ‘Oh Day Away,’ a tale of the insect faeries of the Mouse world!” Archaia have an interview with the creator himself over on their web page. Baldwin the Brave comes out this November. 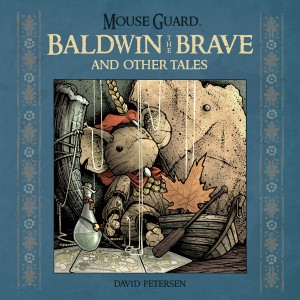 One of the most famous furry comics out there at the moment is Mouse Guard by David Petersen. This sword-and-sorcery tale (tail?) has already spawned collections, role-playing games, and a devoted following. Now and then, Mr. Petersen allows some of his friends to try their paw at the Mouse Guard characters and situations — and some of the best in the business came calling. After the first go-round’s success, Archaia Entertainment have announced that Volume 2 of Mouse Guard: Legends of the Guard will be released as a full-color 4-issue miniseries, starting this May. “Contributors to issue #1 include Stan Sakai (Usagi Yojimbo), Ben Caldwell (The Dare Detectives!), and the team of writer Nick Tapalansky and illustrator Alex Eckman-Lawn (Awakening). Subsequent issues will include contributions from Christian Slade (Korgi), Rick Geary (The Adventures of Blanche), Jemma Salume (Unicorn Life Cycle), Jackson Sze (concept art on films like The Avengers and Iron Man 3), Cory Godbey (Fraggle Rock, the upcoming Jim Henson’s Labyrinth), Eric Canete (Fear Itself: Spider-Man), C.P.