All the Moomins of Our Lives

During World War II, Finnish author and illustrator Tove Jansson determined that she wanted to create something that would help to make people happy — which, needless to say, was in short supply at the time. But all accounts she succeeded wonderfully. For more than 60 years after they debuted in the London Evening News her creations, the Moomin Trolls, have delighted audience the world over — entertaining children with their colorful adventures, and adults with their sly commentaries on society and family life. Now to celebrate the late Tove Jansson’s 100 birthday Drawn & Quarterly have brought together more than 400 pages of her full-color work in a new hard-bound slip-covered collection, the Moomin Deluxe Anniversary Edition. Find out more at D & Q’s preview web site for the book. 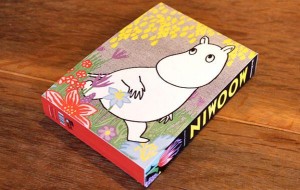 Mostly the usual, with a bunch of juveniles I decided to include anyway. Also Fosgitt.