Orky the Porky Orca (say THAT fast!) is a new full-color web comic written and illustrated by Brett DeWall. The premise is quite simple really: Orky the killer whale is accused of a murder he didn’t commit, and now he is forced to hide out among human kind. To this end he puts on a trench coat and fedora, and no one ever notices he’s an orca. Simple, yes? Oh, and helping him to adjust is a smoking, drinking frog named Pierre, with a French accent and (supposedly) refined tastes. Got all that?  Good. Check out Orky at his web site when it updates every Tuesday. 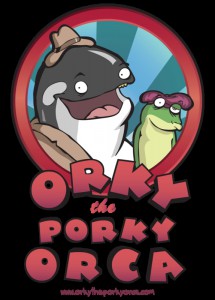 Very humorous premise :) maybe i should make a little time to follow a webcomic...