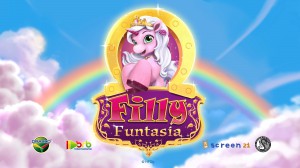 They had me at "Filly", but lost me at "Funtasia".

I believe this is the same thing, but from TV Tropes Shoddy Knockoff Product article:

"The German toy giant Simba introduced their own My Little Pony Shoddy Knockoff Product when the real deal had fallen into unimportance due to neglect by Hasbro. They copied the G3 molds, modified the printing and named the result "My Sweet Pony". Hasbro noticed and sued, and Simba had to apply a few more changes and re-release their small toy horses (not ponies) under the "Filly" brand. Unfortunately, Filly has become so popular among little girls in Germany who have never heard of My Little Pony that the fourth MLP generation would have ended up in obscurity, weren't it for the bronies.

So, it's totally an MLP ripoff, if not necessarily MLP:FiM (though that's just the toys; probably a bit of FiM poaching will inevitably occur for this series).