Among the many Teenage Mutant Ninja Turtles projects coming out of IDW Publishing this year was a mini-series simply called Villains. Now, they’ve collected the first four stories from this full-color series into a new trade paperback, wordily titled Teenage Mutant Ninja Turtles Villain Micro-Series Volume 1. Here’s their summary: “Krang, Baxter Stockman, Old Hob, and Alopex all get their turn. Krang’s history is revealed, Baxter’s secret project may be more dangerous than he realized, Old Hob is ready to branch out on his own, and Alopex discovers a devastating truth about her past.” Hey, how ’bout that? Two furries and an alien have the human out-numbered! Check out the extensive preview at the Comixverse. 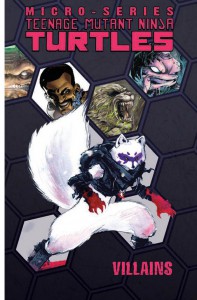