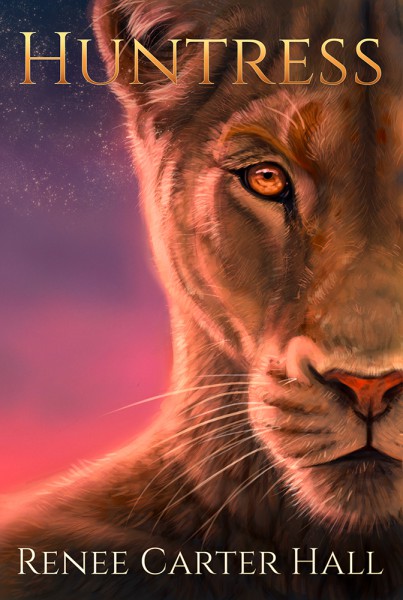 I first encountered Renee Carter Hall's "Huntress" in the Fred Patten-edited anthology Five Fortunes. It was my favourite story of the five, and I'm delighted it has been given a chance to shine alongside three new stories set in the same world.

That world is a fantasy Africa populated by anthropomorphic predators and, conveniently, non-anthropomorphic prey species. In the eponymous novella, young lioness Leya escapes the traditional expectations of her people - a husband, cubs - to join an elite caste of female hunters, a destiny she has dreamed of since the first time the karanja came to her village.

Leya's decision, and her adventures as a novice hunter, are only the beginning. As she settles into her new life, she begins to realise that the things she dismissed as being for other girls, not for her, might be important after all, and to feel that she has perhaps swapped one set of rules for another.

Reaching a crisis point, Leya sets off alone to puzzle things out. She is lucky enough to meet an unconventional family, two painted dogs and a golden jackal, who welcome her into their lives. Leya's time with them helps her to feel at peace, but her story is not yet over.

The prose placed me firmly amongst the people, customs and geography of Leya's Africa, a three-dimensional landscape with vivid colours, smells and tastes. I enjoyed the trip very much. It's refreshing, too, to see a predominantly female cast, what with Leya's mother, her fellow lionesses of the karanja, and her canine friends Ndiri and Shani.

The story does not shy away from death and other heavy themes, and I had tears in my eyes at several points. On first reading, I was worried that no possible ending could be the right one for the story, but the eventual conclusion was both surprising and satisfying. I followed Leya's figurative and literal journey with not only fascination but a hefty emotional involvement.

For this new volume, "Huntress" is joined by three shorter stories. "Kamara and the Star-Beast" is a myth of the karanja's patron goddess, wrapped in a brief visit to Leya some time after the events of "Huntress". It makes a pleasing, thoughtful tailpiece to the novella.

Ndiri and her pup Mtoto, the two painted dogs, were my favourite characters from Huntress, so I was delighted to meet them again: Ndiri as a young girl in "Where the Rivers Meet", and the adult Mtoto in "The Shape of the Sky". The latter is a simple but beautiful story which introduces yet another anthropomorphic species, while the former is an intriguing look at painted dog culture and the factors that shaped Ndiri into the kind, wise figure of "Huntress".

Renee Carter Hall was the writing Guest of Honour at RainFurrest 2015, where "Huntress" was officially released in print form by FurPlanet. RainFurrest also hosted the 2014 Cóyotl Awards Ceremony, at which "Huntress", the original novella, was revealed as the winner in the Best Novella category.

Sweet! I am so happy to see Renee complete another wonderful piece of work! Her and I struck up a friendship after I critiqued one of her earlier pieces and I've been impressed with her writings ever since.

Renee is quite prolific and I feel it's only fitting to show how much work she has done over the years:
http://amzn.to/1OikWNH