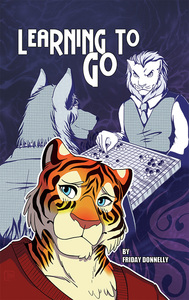 Rufus the tiger's life is stable without being fantastic. He's in a relationship with Victor, a lion, although they argue a lot. He's got a good job, although he works with Victor, which is a major cause of friction.

The incident that upsets the status quo comes early on: Rufus, reeling from another argument and taking advantage of his relationship's open status, hires the services of a sex worker to scratch an itch Victor has been unwilling to explore with him.

When professional dom Bennett, a German shepherd, arrives at his apartment, Rufus is able to see beyond his job (and his good looks), treating him as a person. He'd like to have Bennett as a friend, but this would dangerously blur the boundaries of their arrangement; most friends don't charge $200 an hour to hang out and chat.

Rufus’s interaction with Bennett, and Victor’s reaction afterwards, has him questioning his relationship, and his subsequent journey of self-discovery provides the central plotline. There’s lots more going on in this relatively short read, however.

Rufus is a likable protagonist whose chief fault is that he's a little too eager to please. His insecurities and thought processes are all too believable, and he's a well-rounded character, with hobbies, friends and interests outside the Victor/Bennett love triangle.

Speaking of well-rounded, one of the things I liked best about the story is that Rufus has a sweet tooth, and sometimes comfort eats, but his dietary habits aren't presented as a problem. Sure, he worries about his weight from time to time, but quitting the Oreo pie sundaes (which sound amazing, by the way) and gaining a six-pack isn't the key to a happy ending.

I knew very little about the game of Go, which serves as a metaphor for Rufus's life and philosophy as well as his principal hobby. Donnelly provides enough explanation to pique the reader's interest without getting bogged down in technicalities, and I found the Go matches easily as exciting to read as an account of a more physical sports competition would have been.

The problems faced by Rufus in his relationship with Victor are also realistically and sensitively portrayed. Most of us have experienced a friendship or relationship turned toxic, and hesitated to end it because friends are supposed to stick together through the bad times, or because we're unwilling to confirm all the negative beliefs our loved one seems to have about themselves, other people, and the world.

In his Afterword, Donnelly expresses the intention of helping people who have had to deal with a Victor in their own life. This is no self-help manual, however, nor is it of interest only to D/s enthusiasts; anyone who enjoys furry slice-of-life should find the novella a pleasant read.

Learning to Go is published by Australian indie Jaffa Books. Jaffa is the official Australian distributor for FurPlanet and Rabbit Valley, and for works by Kyell Gold and Jess E. Owen.