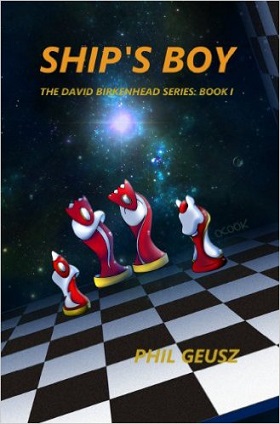 Based in a far future where humans have conquered the stars, this 7 volume space opera follows the life of David Birkenhead, slave rabbit.

The star-faring human race, finding no aboriginals to oppress on the various colonized worlds, create their own non-human slaves. Rabbits, dogs and horses are as nearly as intelligent as humans. The margin is so thin that only their limited education and indoctrination make it seem like a big difference. The House of Marcus, the creator of the rabbit line, has always endeavored to treat rabbits as free as the law allows, but all over the Empire, they see rabbits reduced to mere property status. They begin to secretly manipulate the gene pool so that rabbits might one day be seen as equals ... despite the fur. Their plan is cautious and will take several generations to bear fruit. David Birkenhead is one of two rabbits to be secretly tinkered with, but before he is even born, three houses and their worlds revolt. The Empire begins a series of battles with this new Imperial Nation. Plans to uplift the rabbits further go on the back burner. And then David turns 12 ...

So, you may ask (as many readers on Goodreads.com or Amazon have), why rabbits? Well, I really don't see cats making good slaves. And ther's heavy European influences here, so I wouldn't expect to see birds, which I might if we had more Asian influences. Rabbits are simply cute and make good foils for the violence and turmoil that unfolds. Plus, Phil Guesz is a lapine master.

This is the introduction to the Birkenhead Universe and David is just 12 in this, so I'll skip the usual plea for more sex. Geusz is a very clean writer. His stumbles are rare and I began with decent expectations.

The book begins with a rare special slave holiday where every rabbit has a day off. David finds himself drawn to Frieda with feelings he doesn't understand. Before he can explore those feelings, his father calls him to work, an emergency that David, who wants to make his father proud more than anything else, races off to ... leaving Frieda, who promises to save a tasty fire-lily for him when he gets back.

Their world is invaded, the latest aggression by the Imperial forces. The Marcus Lords barely escape, thanks to David and his father. They are the only engineering crew on the yacht.

Only David and a few of his masters survive to be rescued, including a young James Marcus. The two become fast friends and the foundation for their mutual championing of each other begins. They become brothers, not just because of their shared tragedy, but because they both recognize a bit of themselves in each other.

And thanks to the secret tampering, that may be literally true.

Things turn desperate again at the end of the book when the Imperials catch up to them, but David has a surprise for them.

This volume is less action packed than the first, but we get to see young David grow and receive an enormous amount of recognition in the form of a bejeweled sword. The highest honor in the land, if I recall correctly.

Having adopted David, the Marcus family sends him to military academy, which they do to all the boys in the family. David meets some rather expected reluctance there. I imagine the first of any breed or creed in a formerly exclusive institution has experienced something similar. Having the wrath of the Commondant nearly kill him with repeated trips up an ancient masthead might seem a little extreme, but there was a time when accidental death solved many problems with "uppity" inferiors.

Eventually, David survives the academy, but not before we get a small peek into the Imperial society. It's a very selective peek, mind you ... but it shows enough. While David's Empire has flaws, the Imperial worlds are merciless.

There are hints of talking dog and horse slaves, but we don't see them here yet. I hoped to see at least the horses soon, if only because I am myself rather equine flavored.

This is much more exciting than the previous book in the series. In this volume, I understand how deftly Guesz handles the hard science of his ships and their fighting tactics. I always knew he had a fine hand with the emotional truth of his characters, but in an epic space opera the science is especially important.

An alternate title for this story might be "Attack on Zombie Station" and, yes, David is genius enough to figure out how to use the dead to defend themselves against an Imperial fleet. All hard science and damn desperate tactics, I swear.

We get to meet many rabbits who become heroes in their own right, see humans desert their stations, and we watch David overcoming bad leadership and prove that he earned the Sword of Orion.

This is a short but well done volume.

Tactics are beyond me so seeing space battles done well and explained without info-bombs is a pleasant diversion.

David's genetic programming becomes an issue as he grapples with the very narrow sexuality he's been given. In his adult life, a rabbit's natural urges are quite distracting and his strong will power is barely keeping the frustrations from burning him. He meets with one of his "creators" and he rejects several possible solutions that she offers. Neutering him might adversely affect his ambition and he can't bring himself to breed merely for the sake of breeding.

Homosexuality is briefly mentioned and this reviewer was very grateful to know it wasn't just abusive pricks that could be gay in this universe. Later, we will learn that homosexuality is quite common in David's world, but in the circles where breeding matters - the high society and slaves alike - it seems polite to ignore those that indulge, a cultural "don't ask, don't tell," if you will.

But the average reader will want to know more about the space battles. Well, there's enough explosions in space to make David forget about his sex life. Many die on both sides and David makes one final and almost deadly mistake. In the end, he is forced to surrender.

And that isn't the spoiler you might think it is.

Politics and palace intrigue make for a slower paced story in this volume. There's less daring-do, but still a life and death struggle with the soul of the Empire at stake. The king is dying and a handful of Lords, led by the Wilkes, are struggling to push a new, alternate heir into place rather than David's brother James, the one chosen by the king. Yet, his majesty's will seems to have been misplaced.

Without a single space battle, and with court intrigue still alien to him, David must find a way to save the Empire from shadowy plots because for all their science, they can't keep the King from dying until the day all is well.

Still no direct interactions with the slave horses. I am still keeping the faith, however. Someday, maybe. They were at least mentioned in passing once or twice.

David now must face the perhaps the hardest challenge of his career: continued success. Up until now, David has been able to survive and thrive because when your back is against the wall, desperate gambles are the only game in town.

Now, running across the galaxy, trying to wage diplomacy and heal the Empire, it's the supposedly loyal subjects that stand in his way. Slow to change, his fellow space naval officers follow the same text book the Imperials do. Every draw is a win for the nearly exhausted Imperials and only David and a few seem to see this.

Perhaps the problem was that David took all the brains from the Navy with him. With the best and brightest at his side, the mediocre is all that's left to command the other ships. Perhaps this happens on a lot of battlefields.

The military adventures here are top notch from the ground warfare to the space battles with more death and controlled mayhem than you can shake a stick at!

Oh, and I finally get to see my horses! Mute and no hands! The poor things! And here I imagined them to be big beefy stevedores. This is worse than anything the masters have done to rabbits and dogs. Still, it does make for a nifty, but short, battle.

This is all nothing to the return of Jefferies, a former superior officer of David who proved to be anything but superior during David's time in the Graves Registration division (Vol. 3: Lieutenant). Nestor very nearly becomes undone at the sight of him.

David and Nestor continue to do nothing beyond a few bunny hugs. I'm so grateful that David brings the subject up himself several times in the book. Maybe it's just me, but Guesz's clean and concise prose seems to invite me to ponder things unmentioned. Or maybe that's just the F=furry in me.

Still, the talk does set up a major plot point for the next book.

In this final volume, David wages peace and reconciliation. The Empire begins to heal.

Yet, the personal issues that David's put aside may be the hardest to reconcile within himself. Because he was part of a sort of eugenics program for a slave race, David is programmed only to love someone who would advance the positive traits for capital R Rabbits. To the best of anyone's knowledge, that was just one rabbit, Frieda, who was lost when they were both children to the Imperials.

Few people know this, so just about everyone assumes he and his best friend and aide, Nestor, are/could be gay. Not that anything is wrong with that, but in slave circles as well as in blue blood aristocracy, breeding IS everything.

"Everyone is obsessed by bloodline," King James tells him. David resents these rumors with an intense passion because he can't explain about his gene-gineering without revealing one of the Crown's Dark Secrets.

Upon finding a small colony world where the rabbit slaves rebelled and took over as the Imperial power structures crumbled, David makes an amazing discovery: Frieda.

There is, I assume, a lot of sex. It's all "off-camera," which shouldn't surprise Guesz fans too much, but I felt a little cheated. Frieda, as a slave, is much more experienced from more than a few breeding attempts. David is not at all experienced with anything beyond maybe a little "stress release." Maybe not even that, considering how cranky he gets.

The very slimness of Admiral is so baffling. The seems to be a lot going on in this book, but it could have been easily twice as thick. It would have been nice to know, for example, if there had tears or something, but no. In the final chapter, we learn that David is telling all this (the seven books) to friend, so this type of self-censoring is in character.

I really love the growth of Nestor in this last book. I longed to see Nestor heal and have relationships of his own after his own terrible past sexual abuse. David is content to leave Nestor's heart mainly unexplored. Truth is, I think, David would have heavily resented Nestor having sex or being in love on at least one level, at least before he rediscovers Frieda.

Still, peace doesn't mean the end of Bad Things. And there's one final heartbreak left for Prince David Birkenhead. But some spoilers need to be left unsaid.

I'll be thinking about David, Nestor and Freida for a long time to come.

Don't miss my review of the series.

I love your reviews and I love comparing them to mine to see how I can improve.