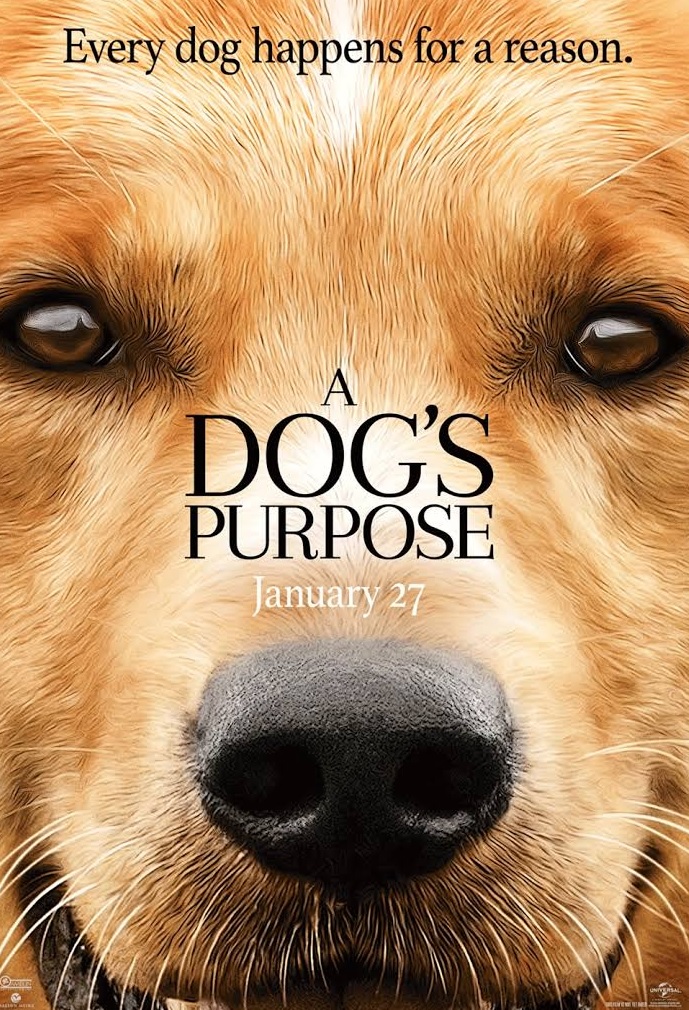 Starting with Old Yeller and continuing with films like the less iconic Marley & Me, American cinema has a simple trick for an instant tearjerker: give us a boy-and-his-dog story, then kill the dog. A Dog's Purpose ornaments this formula with an existential theme strung across many lifetimes, all from the view of a hungry, mischievous pooch.

What is the meaning of life? Are we here for a reason? These are heavy questions, but they're the first thoughts voiced by the feral pup who will become Bailey, our main character. When his first life is cut short by animal control, he realizes just playing and eating all day hadn't added up to much, and in his next life, his determination to find his real purpose leads him into the home of Ethan, a young boy with a troubled home life.

Through Bailey's perspective, we watch Ethan's father try to improve in his career, Ethan's burgeoning football successes, and his blossoming relationship with a girl named Hannah. But because Bailey doesn't understand many human words, and is more concerned with food and playful antics, it's hard to care when the father descends into alcoholism and abuse, Ethan loses his dreams of pro football when a housefire incident fractures his leg, and he pushes Hannah away in bitterness.

Bailey only seems to somber up when Ethan goes off to college and Bailey dies of loneliness—sorry, I meant kidney failure—and his "boy" rushes to his side just in time to say goodbye.

This is Bailey's most significant life in the film; it has the most character development and strongest emotional tugs. Bailey had thought Ethan was his life's purpose, so what was he supposed to do now that they were separated? While Bailey passes the time before seeing Ethan again—as a police dog, pet to an introverted college student, and neglected St. Bernard—so does the movie. It taunts the audience with hints of story and development with these new owners, but instead packs a conflicting mix of humor, charm, and manipulative heartbreak into the middle of the movie, starving us of substance.

This is where the movie fails the most. I can forgive a movie without substance; if you just want to curl up on the couch with a tub of ice cream, nothing pairs better than a fluffy dog movie that starts cheerful and wells into a bittersweet, lessons-learned sobfest. A Dog's Purpose instead shakes your emotions about like a chew toy. It's not a love letter from human to canine, it's shameless goading of empty sentimentality.

Bailey does eventually reunite with Ethan, and he finds out his old master is just as lonely as Bailey has been. He helps reunite the now-grown man with Hannah, and reaches his enlightenment: the purpose of life is about living in the present moment, and finding someone with which to "be here now".

Since that message is really out of place from a character who spent most of his lives obsessing over the past, ultimately finding his happy ending only when he restores it, we have circled back to the film's problems with contradiction. A Dog's Purpose couldn't stop chasing its tail, so it couldn't convince me it knew what life was about.

Pretty much in agreememt here. When I watched it, the whole thing felt like it was designed for people who are easily made to gush emotionally over dogs. It pretty much lost me in the opening scene. A bunch of ownerless puppies in an alley or something - along comes an animal control van, and they only take one puppy to its death (our main character of course), leaving all the others behind. Because... I dunno, animal control people are big meanies, and that one puppy is just that unlucky?

I'll give the film credit for one thing: not overly anthropomorphizing the dog. The dog thinks like a dog, or how we think a dog might think, if dogs could narrate. It only understands the basics: food, play, friendship, smell. It lives in the moment and never understands the nuances of the human world going on around it. As a side-effect though, it's not like the dog could reach deep philosophical insights.

Yeah, I think that its intended audience was made pretty clear from its trailer, which reveals the entire story, so the only people left interested are the Live Laugh Love dog people.

I only watched the film because I was an extra when it filmed in my hometown. You may find my face in the nighttime football scene, cheering when the touchdown is made. Also, there was a scene later in the film that's a short walk from my house.

But for the film itself, I kinda cringed a bit when I watched it. It just seemed so childish for me, like it was trying to play off my memory of My Dog Skip.

My sister & I decided to skip "A Dog's Purpose". It sounds like we made a wise decision.

Disney has the rights to make a film version of this:

>>a 2008 novel by American author and film producer Garth Stein — told from a dog's point of view. The novel became a New York Times bestseller, remaining on the list for more than 156 weeks.The novel follows the story of Denny Swift, a race car driver and customer representative in a Seattle BMW dealership, and his dog Enzo, who believes in the Mongolian legend that a dog who is prepared will be reincarnated in his next life as a human

Actually, how can anyone discuss movies about reincarnation without mentioning “You Never Can Tell”, a 1951 fantasy-comedy? I was ten years old when I saw it, and I’ve never forgotten it.

King is an ex-Army K-9 German Shepherd dog, now owned as a pet by Andrew Lindsay, an elderly eccentric millionaire but taken care of by Lindsay’s secretary, Ellen Hathaway. When Lindsay dies, he leaves his entire fortune ($6,000,000, which doesn’t sound like much in 2017 dollars but was a lot more back then) to King, with Ellen as the trustee of the estate, King’s guardian, and next in line to inherit the estate. King is promptly poisoned by Perry Collins, a fortune hunter who is romancing Ellen to marry her and then, as soon as she inherits the six million, frame her as King’s killer to get her arrested so he will have control of the money.

King’s ghost in Animal Purgatory petitions King Lion to be reincarnated as Rex Shepard, a human private investigator to clear Ellen and expose Collins. Rex is given the ghost of a race horse, Golden Harvest, as Goldie Harvest, his private eye’s sarcastic secretary. Naturally, Rex as a human falls in love with Ellen, but Goldie constantly reminds him that they have to return to Animal Purgatory as soon as he exposes Collins.

Rex as the human private detective was played by Dick Powell, a leading actor of the day who played the role as a comedy-parody of his own role in other movies and radio dramas as a more hard-boiled private eye. Most of the rest of the cast was played by now-forgotten actors, but Frank Nelson, a popular radio comedian with a distinct vocal schtick, plays a police lieutenant who suspects Ellen.

It’s a lot less serious than “A Dog’s Purpose”, but should still be very enjoyable to furry fans.

That sounds a lot more interesting than this!

I think Homeward Bound (and it's spiritual successor Bolt) are still quite pleasant and relevant. It seems to me that Dog's Purpose is vastly inferior to both of those films, so I will pass. If I want my sappy cute talking dogs reuniting with their human owner stories, I will go to one of those.

...and "Homeward Bound" was a slightly reworked version of "The Adventures of Milo and Otis", released a few years earlier.

Being at all similar in structure to Homeward Bound would definitely have improved the movie.

Hey, just like to say probably not going to get a War of the Planet of the Apes review out any time soon, so that's a good opportunity if someone wants to do a movie review.

Otherwise, Planet of the Apes reboot trilogy is going to go three for three with the no Flayrah review thing.

So is this, like, nudging me to do it? owo

It's not aimed at anyone specifically; it in your story's comments only because it was the most recent movie review.

But, in the general case, yes.

It should be pointed out that I watched the first two 'Apes' reboot movies, and couldn't be assed to review them, so if nobody has any desire to watch and/or review this one, I'm not looking down on you, and also maybe I'm being kind of an ass who's all like, "You have my permission to review the scraps I don't want!"

If I wanted to watch the story of a dog who dies, then comes back blah blah blah I'd go watch All Dogs Go to Heaven.