Joe Strike has made a name for himself with his recently published non-fiction book Furry Nation (which has been getting a good deal of attention, of course). But on a side note, Mr. Strike also recently commissioned his first fur-suit — or rather scale-suit, perhaps, as it is an anthro komodo dragon named Komos. Joe then hooked up with fellow writer Oliver Coombes and created Komos & Goldie, an action-adventure crime drama comic series that is decidedly for Mature Audiences Only. “Saurian servant of Circe herself! Sheela-Na-Gig, Celtic sex-goddess, reincarnated! He’s scaly, she’s shiny — together they’re deadly!” And they work to fight organized crime in their own way: Outside of the law, and with more than a bit of magick thrown in. Most of the black & white comic is illustrated by well-known furry and underground comic artist Kjartan Arnorsson. It’s available on-line and also in good-old paper fashion, and both include lots of extra illustrations of the characters by various artists. 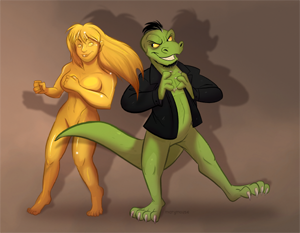 A much-appreciated article, many thanks!

Just to elucidate our creative timeline: Joe & I came up with our respective characters way back in 2008 and Kjartan started drawing pages in late 2011 -- years before Joe commissioned the Komos scalesuit from Artslave, in 2015 (debuted 2016). On the other hand, he was contemplating a costume as far back as 2010! So it's safe to say that Komos the scalesuit and Komos & Goldie the comic are parallel, long-gestating projects. (Our comic may well retain a playful immaturity, however...)

Speaking of which, anyone who wants a complimentary paper issue of Komos & Goldie, please contact either of us on FA or DM me on Twitter (accessible via the Tumblr comicbook site).

Plus I've been thinking about and/or writing Furry Nation since 2008 or so. The book isn't out yet; it'll be published in Nook and Kindle formats in September, and as a paperback in October.

--which will earn me a percentage of the book's sale in addition to the miserly royalty my publisher is paying me.

Thank you for the clarifications! It was difficult for me to research some of the background on this.