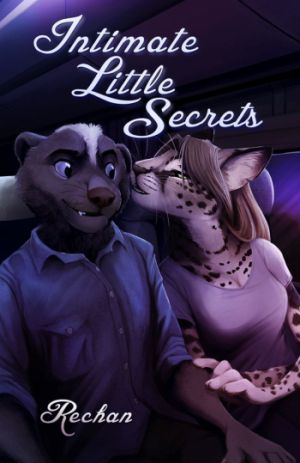 Occasionally quality is let down by the editing, though. This is certainly higher quality than most of what you will read online but that just makes the errors all the more glaring. There is a duplicated quotation mark in one story which is particularly strange as that story is also available through Rechan's SoFurry account and does not contain the error there. Another, very noticeable, one is when "kind've" is used instead of the correct "kind of." This one stands out for me because the incorrect and correct forms are used within five lines of each other on at least two occasions. It's not a deal breaker but it can bring the reader out of the scene.

One of the anthology's major strengths is the diversity of species and how that is worked into the stories. Amongst the more familiar species we also encounter skunks, gazelles, minks and chipmunks. These choices have consequences for the story. Previous furry commentaries have asked questions such as whether the animal aspect plays a role in a furry story and whether there is a reason the characters are furry as opposed to being human. In this anthology it does matter and serve the story in many cases. Sometimes a species strong musk means you don't have to worry about others smelling the scent of sex. In one case we have an interspecies couple looking for a sperm donor because their species are incompatible. There's even a really good piece of world building where one character comments that, due to their reliance on body language, wolves do not communicate well over the phone. This brings the world alive.

In one case the uncommon species choice leads to a bit of ambiguity that an editor should probably have picked up on. That is the cacomistle which I had never even heard about. That's good, I'm learning something new but it's also referred to in the story as a ringtail. If you do a search for these terms what you find is that ringtail refers to the ring-tailed cat (Bassariscus astutus) which is occasionally called a cacomistle but more often cacomistle refers to the cacomistle (Bassariscus sumichrasti). Since the ring-tailed cat is the only one referred to as a ringtail and its range extends into the US it must be what the author is referring to but the term cacomistle is both ambiguous and being used here in its less common form. This leads to confusion when you need to look it up.

I said right at the beginning that this is not erotica but there are sex scenes in almost all of the stories. These scenes are not written purely to aid pawing off but they are more real and occasionally include things like intrusions killing the mood or a guy firing too early. With this more realistic depiction of sex, what I was glad to see was when there was a scene with an escort and client where she used a condom. It's a small thing but it's something which has been noted as lacking in furry art and literature. The furry fandom is sexually open and very much made of personal fantasies which can be risky when taken directly into the real world. Condoms are only used in one story and mentioned one other but that inclusion alone, along with things like HIV testing at MFF, can help create a safer furry fandom.

In summary, despite a few minor missteps, this is a collection of really excellent, character-based writing. The depth of the characters that is established in a very short time is impressive and many of the stories left me wanting more. There's a sense of frustration from that – that I wanted the stories to go on longer – but it is the good kind of frustration. My favourite of the stories would be Missed and Rickety V (They both follow the same characters and Rickety V builds on Missed) which deals with BDSM, love, and polyamorous relationships. Many of the others are also really good, including one tragic one where you can really feel the strain the characters are under. I can definitely recommend it and would be very interested if Rechan does a full novel in the future.

Rakuen received a free copy of Intimate Little Secrets from the publisher for review purposes as part of the Furry Book Review.