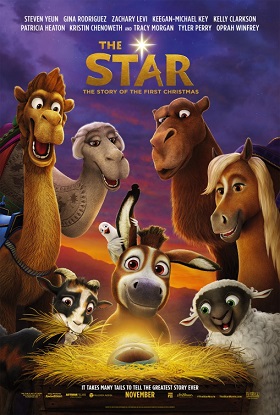 "Jesus our brother, strong and good, was humbly born in a stable rude."
-"The Friendly Beasts", folk song

"Well, we folks of the animal kingdom have our own version."
-Roger Miller, folk singer

Organized Christian theology has never really answered the question whether or not animals can be saved, but popular Christianity, as practiced by people rather than priests, has always seemed to think that salvation is available as much to animals as to humanity. A frequent way to tell the story of the Nativity is via the use of anthropomorphic animals. As a young child, I was at one time or another a lion and a firefly in various church Christmas pageants. Lions have traditionally been used in Christian art to symbolize Christ as King, though fireflies have never been very associated with Christmas in specific or Christianity in particular. I remember singing "This Little Light of Mine", anyway.

Which brings us to the original little light of Christianity and titular object of The Star. This is yet another retelling of the Nativity through the eyes of the animal kingdom, this time updated to slick CGI animated comedy. It's the same old story, but approximately 2.2 billion Christians around the world would attest it's a pretty decent story. So, it's got that going for it.

The movie begins when Mary (voiced by Gina Rodriguez) and a jerboa (voiced by Kristin Chenoweth) learn that Mary has nine months before she gives birth to the Messiah. The titular star appears in the night sky, and is seen by a currently nameless donkey who will eventually be named Boaz (voiced by Steven Yeun), or Bo for short. Bo believes the star has got to be a sign of something important, so he's got good instincts for this sort of thing.

Bo is best friends with a white dove named Dave (voiced by Keegan-Michael Key) and together they plan on eventually breaking out of the mill Bo works and joining the royal caravan. Eventually, Bo does break out, and runs into Mary, newly wed to Joseph (voiced by Zachary Levi); Mary adopts the donkey as her pet, and finally names him. Since Bo was ever so slightly injured in the escape attempt, he's at first stuck with the newlyweds. When a census means a trip to Bethlehem is in order, Bo at first is no help, until he learns a pair of dogs (voiced by Ving Rhames and Gabriel Iglesias) are trailing her.

Most viewers should have a decent idea why a pair of dogs and their hulking trainer (voiced by Jean Dujardin) would be tracking pregnant Israelites at this time (even if it would be a bit inexplicable any other time), but just in case you're not up on your Bible studies, the movie also follows the three camels (voiced by Tracy Morgan, Tyler Perry and Oprah Winfrey) of the three kings, who have their meeting with Biblical villain King Herod (voiced by Christopher Plummer), who in turn decides to preemptively eliminate this potential rival in the king business.

The final important character is Ruth (voiced by Aidy Bryant) a sheep Bo meets on the way to Bethlehem who also saw the star, and is so sure it means something she left her flock in order to follow the star. Since I've been tracking the lack of "cross species pollination" in furry movies since Kung Fu Panda 3, it's important to note that biblical Ruth and Boaz are husband and wife. Way to go, movie about Jesus!

The movie ends with a message saying that, while they obviously took liberties, they tried to stay true to the spirit and values of the story being told. Surprisingly, they did a pretty decent job of this, with characters who show many virtues valued in Christianity, including charity and forgiveness. There's even a pretty good joke about Zechariah near the beginning that won me over. You don't get a lot of good Zechariah jokes out in the world. The movie is clearly preaching to the converted.

It is also very clearly has a very progressive vision of Christianity. There was a clear choice made to depict Mary, Joseph, and even Jesus (as shown briefly in still pictures over the credits) as the brown-skinned Middle Easterners they most likely were. There is perhaps even a sly jab at the over commercialization of the Christmas holiday, as the sound of jingle-y bells is associated with the royal caravan that Bo desires but ultimately rejects.

As an animated comedy, it's only okay. The animation and character design are both adequate, but most of the humor is basic slapstick, and also just adequate at that. Thankfully, while Dave the dove does threaten it a couple times, the movie never goes into actual toilet humor. It's a Christian movie, after all.

Which probably sums it all up. If you're part of the target audience, it works. If you're not, it probably doesn't.

When I started reading the article, ignoring the quotes, I thought to myself, "Wasn't there a country song about an anthro nativity scene?" ( Yup)

That's when I read the upper quote and realized it was a lyric of that song, and huh. Apparently the version I was familiar with was a cover.

No slight to the Ives, but the country cover was better. Each character got their own singer, which really sells the story being told.

Honestly, if Mary and Joseph were depicted as, you know, actual Jews, and Jesus still came out looking like a baby Fabio, that would actually be a lot more offensive. Like that movie 3000 B.C where the "miracle child" is the first one born with blue eyes.

First off, I have not seen this film and thus will not offer any judgment on its merits or lack thereof. That said, there are a couple of things in the review that merited a response.

To my knowledge, "This Little Light of Mine" is not usually regarded as a holiday song, but rather one that may be used year round and most often (though not exclusively) when children are involved. The light in question is usually represented by the light of a candle (this is the first I've heard of it representing the light of a firefly), though it's symbolic and often tied to the Bible verse about placing one's light on a lampstand rather than hiding it under a bushel.

Also notable is that no animals are mentioned in the Biblical stories of Jesus' birth. St. Francis of Assisi (1182-1226) is credited with introducing the idea of including animals in nativity stories and settings. St. Francis has since become the patron saint of the animal kingdom.

Is salvation available to animals as it is to humans? In 2009, the book "Will I See My Dog in Heaven?" by Friar Jack Wintz was published, presenting arguments based on the Bible and the known works of Francis of Assisi in favor of salvation for animals. When I posted a review, it attracted a vehement rebuttal from a guy who was certain that the afterlife was strictly the purview of mankind and that when animals die, that's it. He dismissed out of hand anything not from the Bible, and was dead certain that his interpretation of any relevant Bible passages was the only correct interpretation and was not really open to the possibility that there may be other valid interpretations (believe it or not, this person was a furry). A quick google search reveals plenty of others arguing against animals having any kind of spiritual existence beyond their earthly life, though as the aforementioned book indicates there are also those who are strongly in favor of it. Don't kid yourself for one minute that there's anything close to a consensus across various Christian faiths on this point.

It's always interesting that those that believe that only humans can be saves spend their time playing as animals, for sure.

Guess they gave up?

Even worse: do you all end up in the same afterlife? I mean, Protestant vs. Catholic is bad enough, but consider the Beastlands's Hollyphants, Elysium's Moon Dogs and Arborea's dragons (reminds me of arboreal skiltaire). And wither fox-dragon-plant hybrids?

Still, regardless of the official positions of religious leaders, at least some of the followers want to feel there's an afterlife available to their pets, taking a more allegorical than literal approach to the bible. Popular culture sometimes feeds into this, like Don Bluth's All Dogs Go to Heaven, or finding condolence in the concept of the Rainbow Bridge, or maybe just providing a pet with a final resting place to help with the mourning process.

At some churches, the St. Francis of Assisi thing allows for the blessing of animals once a year. Sometimes interpreted a little more broadly? And can definitely get a little exotic.