In the spirit of “How did this sneak up on us?”, it turns out that Condorito now has his own movie — called, appropriately enough, Condorito: The Movie. What, never heard of Condorito? The bird-with-a-beret was created in 1949 by Chilean doctor and political cartoonist René Ríos Boettiger. Since then, the bird has gone on to become practically the Mickey Mouse of Latin America… which is funny, given that he was created to make fun of Walt Disney’s over-sanitized version of Chile in the film Saludos Amigos. The Condorito gag strip (always ending with a lame joke or pun, and lots of characters fainting over backwards with a loud PLOP!) has become so well-known that someone was bound to make an animated movie out of it. And now Pajarraco Films (from Peru!) have brought Condorito to the screen in CGI. (It’s only been released in Spanish with subtitles, so far.) The plot? Condorito would desperately love to date his va-va-voom human girlfriend Yayita, but doing so means he has to get past her disapproving parents. Things get a bit more complicated when invading aliens capture and run off with Yayita’s mama — and who else but Condorito to try and rescue her? Admittedly the critics have not been kind to the film, some complaining that it smooths off the rough edges and adult content of the original strip. Though not very approving either, Lili Loofbourow’s review for The Week has some good background information on the strip. Oh, check out the official trailer too. 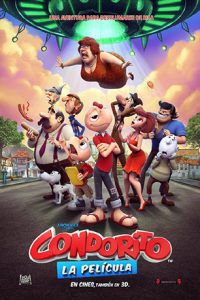