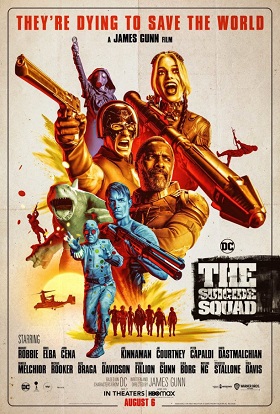 Flayrah Mission Control: You have been chosen for your unique abilities to take on a mission of utmost importance. You must describe and evaluate James Gunn's The Suicide Squad for this website's audience of furries.

Okay, I can do that. Fine. I'm not sure if my "abilities" are that unique, though. And since when have we had a "mission control"?

FMC: What are you talking about? We've always been here, monitoring your activities. Waiting for the moment when the world most needs your skillset. Which is right now. Articles about superhero movies with marginal to minor furry elements. Avengers: Infinity Wars. Avengers: Endgame. Spider-Man: Into the Spider-Verse. Guardians of the Galaxy. Guardians of the Galaxy Vol. 2. That's the unique skillset we're talking about. Those last two are even by the same director as The Suicide Squad's. So what's the problem?

Furries might enjoy The Suicide Squad, a movie about super-powered criminals being forced to work as a secret government "Task Force X", which features an anthropomorphic shark and a team member who talks to rats (there's also a Weasel, but the less said about him, the better). It's showing in movie theaters now, and is also available to stream with an ad-free subscription to the HBO Max for the next month.

FMC: That's a description. Half the mission is done. But what we need is an evaluation.

But I didn't even like this movie that much. In fact, I liked the universally panned 2016 Suicide Squad more, and I'm not sure I really want to defend that position.

FMC: Sounds like a problem. But it's your problem. Complete the mission. Or we'll totally blow up your head.

So that's it? What? This some kinda ... The Suicide Squad review?

Whatever you want to say about the first Suicide Squad movie, this movie does seem to acknowledge it's existence, even though I've heard it called a "reboot". Not that you need to see Suicide Squad in order to understand The Suicide Squad, though both are available to stream on HBO Max, so if you went that option and want to make it a double feature, that works. Whether or not they are part of a DC equivalent of the MCU, I have no idea.

Margot Robbie returns as Harley Quinn, remaining the stand out character of the recent DC movies. Also returning is Joel Kinnaman as Colonel Rick Flagg, the non-criminal military guy nominally in charge of the squad, while Viola Davis plays Amanda Waller, the woman really in charge. Idris Elba, the thinking man's Will Smith, plays Bloodsport, a like-for-like replacement of the original movie's Deadshot, who was played by Will Smith, the working man's Idris Elba. Other newcomers of note include John Cena as Peacemaker and David Dastmalchian as the Polka-Dot Man, while Peter Capaldi plays the Thinker, who is really more of a villain not part of the Squad. Or maybe those characters aren't important and I listed the ones who get killed off almost instantly just to throw you off, because characters do get killed off. The point is, all of the actors, whether dead in five minutes or mainstays of the movie, do great. The performances are not my problem with the movie.

In fact, I'd like to point out one character, Daniela Melchior's Ratcatcher 2, as a highlight, especially from a furry perspective. Her power is she basically talks to rats. In practice, this makes her basically the DC equivalent of Marvel's Squirrel Girl, though, of course, all grim, gritty and just DC-y (Ratcatcher 1, her father, died of a drug overdose). Though she's most effective controlling massive swarms of rats, she does have one especial sidekick rodent named Sebastian, who is great. I won't spoil if Sebastian is more Tippy Toe or Monkey Joe. One of the better jokes of the movie is that one of squad members has a rat phobia they've kept hidden, and Sebastian trying to befriend them is a problem.

King Shark, voiced by Sylvester Stallone, on the other furry hand, is just Groot. Big dumb muscle who is less an immoral and more just an amoral criminal, is almost impossible to kill and featuring a stunt cast vocal performance. Don't be surprised if whatever they end up calling the third Suicide Squad movie features Baby Shark. At least Groot's vocal performance had a twist. Which is from the comics, so neither Gunn nor stunt cast Vin Diesel actually came up with that. Killer Croc from the first movie didn't have much going on either, but you combine Groot and Killer Croc and you get King Shark.

The plot also seems a bit recycled. To be clear, it eventually involves starfish aliens attaching to people's faces and turning them into pseudo-zombies. But the thing is, the basic plot, where a group of dangerous people travel to a fictional island nation on behalf of the U.S. government after it is taken over by a violent coup only to find that nefarious goings on behind the scenes have been manipulated by said U.S. government is also the basic plot of the appropriately named The Expendables. Think maybe King Shark should have noticed that, at least.

I'm just going to be blunt. This is James Gunn's worst movie since Super. And while Super was just kind of a sophomore slump for a director still finding his way, the problem with The Suicide Squad is that it already feels like Gunn is just going through the motions of stuff he's done before, only better. This is his fifth movie as writer/director, by the way. I'm still looking forward to his eventual Guardians of the Galaxy Vol. III, but it will be his fifth superhero movie with morally ambiguous protagonists in a row.

He might be due for a change of pace.

“I’m just going to be blunt. This is James Gunn’s worst movie since Super.”

So I guess you haven’t seen Movie 43?

Not counting one segment of an anthology film as a whole movie. Though, yeah, I haven't seen it because I have literally heard nothing good about it.

So I finally got round to seeing The Suicide Squad. Not the the first time, I disagree with basically everything Crossie says, including the words "a", "and" and "the".

(Social distancing wasn't a problem, by the way: I was one of only 3 people in the cinema!)

The movie's as bloody as hell and a touch too long -- but it's also an absolutely entertaining blast of black humour! James Gunn embraces the silliness of the premise yet doesn't play destruction for laughs. Not an easy balance but he succeeds, just as he juggles a vast yet compelling cast.

King Shark and The Weasel get to survive the mayhem too.