First Second brings us a popular fantasy comic from France, collected now in one hardcover graphic novel. Kairos is written and illustrated by Ulysse Malassagne. “Nills and Anaelle are looking forward to their first night in their rustic cabin in the woods. But the couple’s idyllic vacation is suddenly thrown into turmoil when a strange flash of light bursts from the fireplace. A portal appears, and out of it spill dragon-like creatures that are armed to the teeth. They grab Anaelle and flee back through the portal, leaving a distraught Nills with a sudden decision: Stay behind, or leap through after her? He leaps. And that’s when things get really weird.” This new English translation is available now. 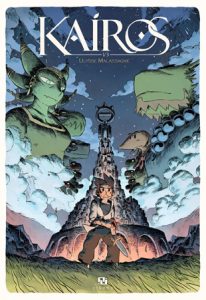