Earlier this year the artist known as Travis Hanson (creator of fantasy comic The Bean) ran a very successful Kickstarter campaign for his new project, Tanner Jones and the Quest for the Monkey Stone. ” Turns out, he more than doubled what he was asking for! So, the new full-color 60-page book will be shipping this June, according to his web site. So what’s it about? “It’s about a boy named Tanner Jones and his adventure to find the Monkey Stone. Something he just can’t do alone, so he enlists the help of the greatest treasure hunters around: The pirate bears of the Scrawny Duck. It’s a journey to an uncharted isle, full of mystery and danger, but most of all just pure fun and the importance of following one’s dreams.” 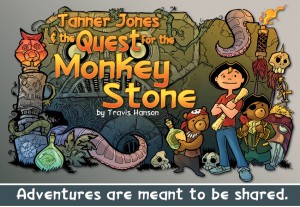