Pi-Rats (and Others) in the Sky!

Pirate 101 (from Kings Isle, the same creators as Wizard 101) is an on-line multi-player role-playing system of pirate adventure and battle — in the sky, no less. Yep, flying pirate ships.  It’s a decidedly family-friendly game throughout, though it has “adult” and “child” areas as part of it. The interesting thing is this: As you can see from the preview trailer, and in the picture below, there are plenty of anthropomorphic player characters to be had and played, as well as the more traditional human sort. Visit www.pirate101.com to find out how to get started with the game. 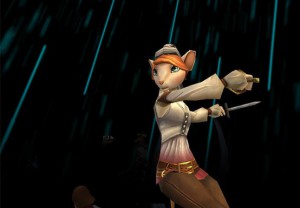