The Girl, The Gods, and the Fox

Sentai Filmworks have released Gingitsune: Messenger Fox of the God — Complete Collection, bringing together all 12 episodes of the anime TV series based on the original manga by Sayori Ochiai. Here’s part of the review by Charles Solomon over at Animation Scoop: “For 15 generations, Makoto Saeki’s family has maintained the Inari shrine to the agricultural god Ukanomitama. Makoto lives there with her widowed father, a well-meaning, slightly befuddled man. Because her bloodline makes her the heiress to the shrine, teen-age Makoto has ‘the gift': She can see and converse with Gintarou, the resident fox-spirit who is a herald of the gods. Heralds traditionally live and work in in pairs, but his partner left many years ago. Gintarou is later joined by Haru, a much younger female fox spirit brought to Inari by Makoto’s friend Satoru… Gintarou functions as a sort of substitute father/big brother to Makoto. He’s gruff, cranky and lazy, but his façade of indifference can’t disguise his affection for her.” I like Mr. Solomon’s description of the fox spirit: “Gintarou has a scarred fox’s head stuck onto a burly human body. He looks like a macho delegate to a Furries convention.” So noted! The 2-disc DVD set is for sale over at Best Buy. 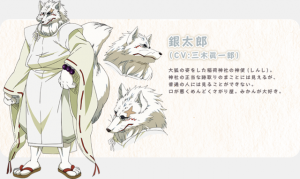