Down Down, Down in the Water

Bound Tales is an imprint of the ever-reliable Thurston Howl Publications. One of their recurring titles is the anthology called SPECIES… and the latest release is about none “otter” than everyone’s favorite water-weasels. “SPECIES: Otters showcases drama, action, and adventure. Otters construct planet-circling water slides, uncover covert knowledge sunk to the bottom of a river, and confront what it means to be an otter. With stories by Frances Pauli, Mary E. Lowd, and Madison Keller, this anthology invites you to dive into masterfully crafted anthropomorphic fiction!” Edited by Significant Otter — of course. You can find out more over at the Storenvy page. 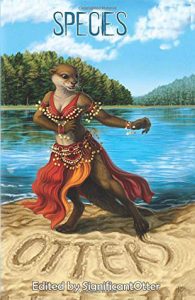 Hello there, and welcome to July’s episode of Digging Up Positivity. This month we will cover some amazing members of our community, lovely videos, and our featurette is a wonderful artist from Berlin known for her outstanding artwork for individuals and companies alike.

A recent video has popped up on Youtube and was sent to me by a corgi friend of mine. Apparently someone by the name of Stefan Molyneux had interviewed a furry in a video named: The Shocking Furry Fandom Conversation. Yes, Really!. Given the thumbnail containing the mugs of the leaders of the Furry Raiders I thought this person was interviewing them, but as it turns out the content of the video didn’t seem to have anything to do with the controversial alt-furry group.

Or at least that is what I thought coming away from the video. As I did more investigation into this Mr. Molyneux and the methods in which he is infamous I started to come to a bit of a more darker conclusions and questioning the intent of the video. Could this seemingly innocent interview with a random YouTuber actually be a propaganda piece crafted to fulfill as a recruitment tool aimed at furries? A way to take aim at those in the furry fandom and have them join the Freedomain fandom, a group which seems to have been noted as having cult-like qualities by some press releases?

Well I don’t know about all that. In fact, the reason I put the word cult in the headline is simply because Stephan put the word sex next to furry on his video’s thumbnail. And like me seeing those two words together for the purpose of click-bait made me eye-roll, I’m sure seeing his organization being called a cult all the time earns similar expression from Mr. Molyneux. Also, inquiring to Patch, he seemed to indicate that Leon was an actual person and the conversation was legitimate. So, with that in mind, I gave it a second watch and highlighted items of interest, both good and bad in the conversation. Review: 'Otters in Space: The Search for Cat Havana', by Mary E. Lowd

Otters in Space: The Search for Cat Havana by Mary E. Lowd is a short novel that received a 2010 Ursa Major Award nomination. It's a work of light science-fiction that I think might appeal to young adult readers. It's available from FurPlanet and Amazon, and in electronic format - see the author's website for details and links. I read the FurPlanet 2012 edition, 176 pages, ISBN 978-1-61450-043-8.

Mary Lowd's name really first stood out to me in the 2012 Ursa Recommended Anthropomorphics List, which included six of her short stories. It's not unusual to see authors with multiple recommendations on the list, although when they all appear at the same time, it feels like overkill. Anyway, of those six, I definitely enjoyed St. Kalwain and the Lady Uta, appearing in ROAR volume 4, so I was curious what she would do in a longer format.

This is credited as the Second Edition; but it went on sale at Anthrocon 2013, July 4-7, while the Kindle and Smashwords first editions have an August 24 and 25, 2013 publication date. That’s later.

Does anyone besides me care about this bureaucratic trivia? This is a good read, in a handy trade paperback edition for those who don’t want to read it on their computer. Get it in one format or the other.

But this is a direct sequel to Lowd’s Ursa-Major-nominated Otters in Space: The Search for Cat Havana. If there is any flaw with Otters in Space II, it is that you need to have read the first book to really understand it. Or at least read the review of it, in Flayrah on February 6, 2012. A four-year-old otter named Mo from Slimbridge Wetland Centre in Gloucestershire has started to climb trees. Mammal Manager John Crooks believes the behaviour may be a reaction to overcrowding from her younger sisters and seven-year-old mother Flo.

Mo began climbing at Christmas, and has ventured progressively higher over the past month. While the activity is not completely unheard of among otters, it has not been seen before at Slimbridge. [story tip: Kenoscope]