A Legend in his Own Mind

He’s a vegan hippie with super powers, sort of. He’s Ethan Young, hero of Tails, an on-line comic… written and illustrated by Ethan Young. Maybe we’d better let the publisher explain: “Quirky, funny, and surreal, Tails follows the semi-autobiographical exploits of Ethan, a vegan cartoonist with super powers (sort of). Ethan uses his comic book creation Crusader Cat to escape from the real world, but things get interesting when his escapist work starts to talk back to him. Poignant, funny, and daring, Tails is an unflinching portrait of a believable character as he starts falling into the abyss of an unbelievable world, with results ranging from hilarious to heart-breaking”. Now Hermes Press have announced they are publishing the first Tails collection in graphic novel form, Tails: Book One. Look for this new black & white trade paperback in April, or you can pre-order it on Amazon right now. 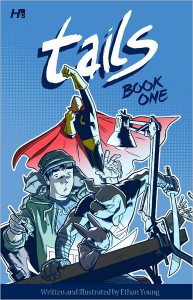 I would claim coveting thy neighbor's possessions, but probably the case of two cavemen whom never met both learning how to create fire.

It's happened with me before, when I wrote Sonic fanfiction I used the name Tantrum. Apparently there was a Fleetway Sonic comic character by that name that I never heard of until someone asked if there was some kind of relation (I think the comic came after I had had that penname for awhile).