Less than a month after the Corey Helford Gallery in Culver City, California held its “Animal Kingdom” exhibition of Josh Agle’s Furry-inspired paintings, the WWA Gallery, also in Culver City’s Art District, is holding its “Gag Me With a Toon 4” exhibition, from March 17 to April 21, of paintings by different artists irreverently inspired by “last century’s” animated cartoon and comic book characters.

The majority of the paintings in this exhibition feature non-anthropomorphic characters like Superman, George & Jane Jetson, Boris Badenov & Natasha Fatale, and Fred Flintstone. But there are enough paintings of cartoon animals like the Angry Beavers, the Animaniacs, Beany and Cecil, Chip ‘n’ Dale, Garfield, Gossamer, Heathcliff, Mickey Mouse, Mighty Mouse, Roger Rabbit, Scooby Doo, and the ThunderCats to make “Gag Me With a Toon 4” of interest to Furry fans. 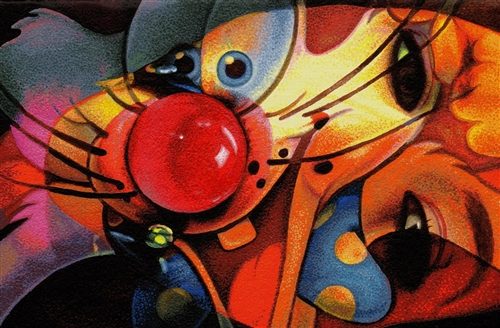 You mean you wouldn't pay $3,800 for this? http://www.wwagallery.com/ProductDetails.asp?ProductCode=artgmt75

I wouldn't pay five cents for that. If I wanted to scare myself, I'd watch Arachnophobia, or maybe Jaws.

To wit: Creepy as fuck.

You think THAT is creepy?

Try going to the bad section of Deviant Art!

While I'm normally all for atrocity tourism, sparkledogs and anime-haired wearrior cats are very thick to swim through, and I'm afraid they'll stain my fur.

Today, Saturday, April 7th, my sister Sherrill and I went to see the “Gag Me With a Toon 4” art gallery exhibit at the WWA Gallery in Culver City’s art district.

Culver City is on the other side of Hollywood from my convalescent hospital. It took us about an hour to get through Hollywood; all the tourists were out and the streets were totally clogged. Was there something going on that we didn’t know about?

The WWA Gallery is on Culver Boulevard, a major business street in Culver City just a couple blocks from the landmark Hotel Culver (real estate developer Harry Culver sure was proud of himself) where Judy Garland and all of the Munchkin midgets stayed during the filming of “The Wizard of Oz”. Despite being a busy boulevard, it is a relaxed neighborhood; the gallery is next door to a sidewalk café.

To quote the gallery’s publicity sheet, “WWA Gallery presents Gag Me with a Toon 4 (GMWAT 4), a tribute exhibition that has it all – humor, nostalgia, and the right mix of sweet and spice.

The creation of Steven Daily, GMWAT began as a nod to the cartoons of the 80s that influenced his and many of his peers artistic styles. Now in its foirth year, this action packed event is bigger and badder than ever with over 70 artists reinterpreting the cartoon magic they grew up with. So no matter when you plunked yourself drooling in front of the old tube there is sure to be a piece that will transport you back to simpler days.”

There follows a list of the 70+ participating artists, which I will not copy since I do not recognize any of them and I assume that they would be equally meaningless to Flayrah’s readers. Several of them are obvious pseudonyms anyway, like Honkey Kong and Johnny Crap. Uh-oh, I take that back. Jhonen Vasquez is on the list.

Frankly, there is nothing in the exhibit that is not on the WWA Gallery’s website which is linked to the Flayrah announcement, so you can see the whole exhibit without coming to Culver City. What you will miss is the WWA Gallery itself. Unlike the “Animal Kingdom” exhibition at the Corey Helford Gallery last month, GMWAT is less interesting than the gallery in which it is displayed. The WWA Gallery is no stark white box; it is a well-lighted rococo-decorated maze of corridors in all directions, all lined with the paintings to be seen on the website announcement of the exhibition. One enters the gallery by going up a short ramp that leads to a floor-to-ceiling wall painting of a demonic Heckle and Jeckle, which is permanent and not part of the exhibit. From there, you can choose your own path through the labyrinth and try not to get lost.

My only comments on the exhibition are that, as implied in the announcement, the cartoon animal characters are far outnumbered by the cartoon humans like Popeye and Fred Flintstone & Barney Rubble; that of the cartoon animals, Scooby Doo is the most popular character; that Matt Richie’s “Three Blind Mice” (a blindfolded Mickey Mouse, Speedy Gonzales, and Mighty Mouse) which looks like a single painting on the website is actually three separate works; and that slightly less than half of the 70+ paintings were marked as sold.

The exhibition has two more weeks to run.

If he doesn't get paid for doing this, he should be. Even for a simple venue and gallery review, you covered everything important most interested people would like to know about in brief without over-saturing their mind with every detail.

Apologies for the awkward appraisal. I just felt like it. Carry on. :3

Flayrah's reviewers are not paid; however, some reviewed works are provided by publishers.

[Our ads return less than two dollars a month; a fair cut of the $100/quarter I pay Timduru for hosting, traffic-wise. It's also about what I pay to advertise Flayrah - although I'm currently working through a promotional credit there.]

Edit: Forgot Amazon referrals and Kindle subscriptions; combined they might make up another $4-8/month.

Yeah; I get several hundred dollars' worth of free books each year for my reviews. Especially all the coffee-table "The Art of ..." animation books with cover prices of $35 to $50 each, that I review for Animation World Network. http://www.awn.com/category/columns/fred-pattens-book-reviews

Better then money, because with money you've gotta pay taxes.

They may not be counted as compensation by the IRS, but the provision of review copies should really be noted (on each item, not just here).

[See the FTC's Endorsement and Testimonial Guides, § 255.5 Disclosure of material connections, Example 7 (last page of the document). While Fred does not receive affiliate revenue, I believe he keeps the books.]

I keep the books, and when I run out of shelf space, I donate them to the University of California, Riverside Library's Eaton Collection of Science Fiction & Fantasy. http://eaton.ucr.edu/ Books about anthropomorphic animals are automatically fantasy. The Eaton Collection has one of the largest archives of the history of Furry fandom.

Incidentally, I know from talking with the UCR librarians that they would love to get some donations of FurSuits for the Eaton Collection. What do FurSuiters do with their old costumes, anyway?

There has been some discussion of this on the 'fursuit' LiveJournal community. I suspect if you (or I) asked in a new post on that group, you'd have a reasonable chance of rustling up a few donations.

Bodysuits tend to wear out and are often less worth keeping around than heads - although this has arguably changed over time - so they may be disposed of while the head is kept.

I have tried to post a reply to this 'fursuit' discussion, but I don't think it went through their automated comment engine. If someone would re-post it there, I would appreciate it very much.

"I know from discussions with the librarians at the University of California at Riverside Library that they would love to get some donations of FurSuits for the Library's Eaton Collection of Science Fiction & Fantasy. The Eaton Collection has one of the largest archives in the world of materials relating to the history of Furry fandom, but it does not have any FurSuits. http://eaton.ucr.edu/"

Since on reflection the question is not related specifically to building fursuits, I've posted it to the Fursuit Lounge; I'll point any interest parties towards you and the Library.