Sweet Pickles is a classic educational children’s book series by Ruth Lerner Perle, Jacquelyn Reinach, and Richard Hefter which was published by Holt, Rinehart & Winston from 1977 through the mid-1990′s. Each of the 40 full-color books portrayed the adventures of the inhabitants of the town of Sweet Pickles: 26 anthropomorphic animals (one for each letter of the alphabet) who get into various “pickles” because of their all-too-human flaws… and who must learn important life lessons to get out of them. The Wikipedia entry for Sweet Pickles details each of the characters such as Accusing Alligator, Moody Moose, and Temper Tantrum Turtle. After having been out of print for the longest time, the entire series is now returning on-line in a brand-new on-line series. But not just the books: Now the original stories are presented as digitally-enhanced e-books with professional sound-effects, narration, and character voices by award-winning voice actors. For a limited time the first e-book in this new series, Very Worried Walrus, is available as a free download at the Apple iBookstore. You can find out more about the return of Sweet Pickles at www.sweetpickles.com/fob.html, and also check them out on Facebook. 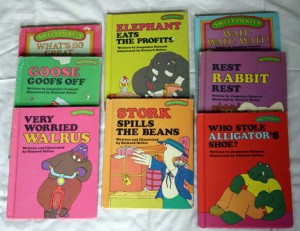