Here’s a phrase we haven’t heard for a while: Battle Beasts. A would-be toy tie-in / collectibles phenomenon / comic book series from the 1980′s, it never took off in the way that similar ideas did about that time. But now IDW have announced plans to bring forth a special 4-issue full-color Battle Beasts mini-series — with a wait-and-see attitude as to if it goes beyond that. “It’s just another average day for Bliss, an ignored linguist at the Department of Defense. However, when Bliss unlocks the secret translation of an ancient scroll, terror rains from the sky… in the form of the BATTLE BEASTS! Unstoppable creatures armed to the teeth, the Battle Beasts are determined to make Earth their own personal war zone. Nothing can stop their merciless carnage. Nothing except perhaps a gentle word from the one woman who can understand them—Bliss!” The new series is written by Bobby Curnow, with art by Valerio Schiti and Dan Brereton. The new series of comics and toys first hit during the recent C2E2 con in Chicago. Check out Comic Book Resources to find out more. 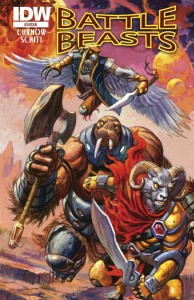