Gotta love the Japanese sometimes — especially their animation, of course. Kanokon is a direct-to-video animated series from Media Blasters.  It is decidedly adult in nature, though not pornographic. Here, we’ll let them describe it: “Kouta, a country boy who lives with his grandfather, is moving to the city to attend high school. Changes come with his new home and new school, but nothing could have prepared the gentle young man for girls, specifically a bombshell fox spirit named Chizuru! As if her aggressive advances weren’t enough, he also catches the attention of a frosty wolf spirit named Nozomu. Kouta is dragged into supernatural events as a result of his contact with the two girls, and his school life only gets more chaotic by the day. But with a girl who gives ‘foxy’ new meaning and another howling after him, things are looking up for his love life.”  Now Media Blasters have released all the Kanokon episodes in one DVD collection.  RightStuf.com has information on it and other special releases from the series. 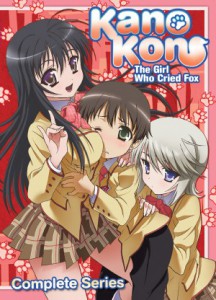