In case you haven’t caught wind of it yet, Dreamworks Animation will release their new feature film Rise of the Guardians on November 21st.  And already the character of the Easter Bunny — voiced by Hugh Jackman, and referred to in the story as Bunnymund — is turning quite a few heads in furry fandom. Now the tie-in merchandise is beginning to show up. First out the gate is a new full-color graphic novel from Ben Lichius and Marcelo Ferreira, Rise of the Guardians: The Hidden Truth and Other Stories. It goes like this:  “North. Bunnymund. Sandman. Tooth Fairy. They are the make-believe characters that populate the imagination of children the world over. But young Jamie believes otherwise. They’re all real, and he’s been collecting the ‘evidence’ to prove it! When Jamie’s friend, Toby, comes over to spend the night, he finds Jamie’s ‘Weird Stuff’ scrapbook full of copious notes and samples about unexplained phenomenon, and the talk turns to Jamie’s stories of near-miss encounters. It soon becomes evident, however, that Toby has a pretty amazing story of his own to tell.” Ape Entertainment will release this new trade paperback on October 23rd, and you can pre-order a copy at Barnes & Noble. 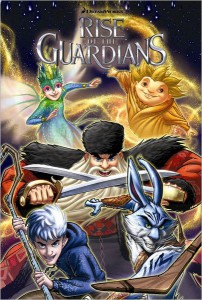 : Rise of the Guardians