Somehow, another cultural meme has passed us by (we admit it), but evidently this is a Very Important Llama: “Polka Spot has traveled the world as a fashion model, pop superstar, movie star, magazine editor, diplomatic problem-solver, and general global icon. She goes where no llama has gone before. Her life in pictures is worth a million words. And every one is massively important.  In the rare moments that Polka Spot has any down time, she lives at home with Brent Ridge and Josh Kilmer-Purcell, better known as The Beekman Boys, on their farm in Sharon Springs, NY. The Beekman Boys, who will be competing in the Amazing Race on CBS this season, wanted to feature their popular llama from their show that will start airing on the Cooking Channel later this month.  Bluewater Productions is giving this larger-than-life personality a brand new comic series titled Polka Spot: My Life in Pictures. The all-ages comic was co-written by Bluewater President Darren G. Davis, Michael Troy and the Beekman Boy himself, Brent Ridge. Polka Spot’s vibrant art was created by talented artist, Bernat.” Following all that?  We really didn’t either. But, you can find out more at 1st Comic News. Bluewater Productions will bring us Polka Spot #1 in full color this October. 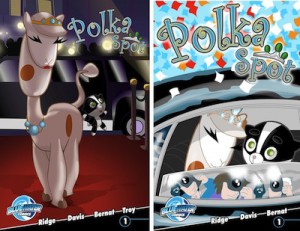 Wow! I am underwhelmed! How many people remember Studio 91 Creation's "Mogobi Desert Rats" which was premiered at the 1991 Comic-Con International with lots of glossy color flyers and similar hoopla? Did that ever get past an eminently forgettable #1? Or there was -- I don't even remember his name, but he was a snowy white Husky or Malamute anthro superhero with floofy white fur all over, whose promoters had an incredibly beautiful full-body costume made that any Fursuiter would kill for, and he paraded all around the Comic-Con whichever year he showed up, in the late '80s or early '90s. Did even a first issue of his comic book ever come out? Creators &/or promoters can spend tons of money announcing their new anthro comic book, but let's see it. Come to think of it, this was sort of like the dot.com bubble, where startup companies had great promos and raised tons of financing, spent it all on setting up lavish corporate offices, underperformed or didn't perform at all, and quickly disappeared.

I admit I don't remember it. :) I do have vague remembrances of anthropomorphic books coming out in the 1989-1992 range or so that collapsed quickly, although IIRC that era really was the dot.com bubble equivalent for independent comic books. How many Adjective Adjective Adjective Species books were there at one point?

Of course, I also have vague memories of the flyer that MU Press produced when they first appeared, which included several really interesting-sounding titles that never happened. One was by an ex-animator from Nelvana, although I don't remember any details now.

Was that MU Press's never-appeared "Dance of the Radio Men" by Lou Scarborough Jr.? I wrote a 1994 announcement based on that flyer. "The first issue of Lou Scarborough Jr.’s Dance of the Radio-Men should be published just about now. This is an offbeat mini-series scheduled for six to eight monthly issues. “Rachel Plympton is a television line producer for a superhero program who, in the process of saving her show and studio from being sold out from under her, herself becomes a ‘super-hero’. The series deals with the idea of imagination as both commodity and survival for the humans known as Teerithians. Rendered in traditional animation techniques, this is the first original concept-animation comic,” says Melville. This is a rather marginal ’morph title; it is set on Teerithia, an Earth-like planet whose people look roughly like the generic funny-animal background characters in Carl Barks’ Duck universe." I saw most of the finished artwork for #1, so it was not just big talk. Lou Scarborough Jr. made a very big impression on Furry fandom when he first appeared in the early '90s. He had worked at several major animation studios, had a very pleasant cartoon style, and was always just about to begin producing a Furry comic book for MU Press or Antarctic Press or Thoughts & Images or somebody. Which never happened. One time he had just gotten a job with John Kricfalusi animating Ren & Stimpy or something, and he had to put aside his planned comic book for *real* animation work. Whatever happened to Lou Scarborough Jr.? (Snide answer: he's become a permanent house guest of Marc Schirmeister.)