Just in time for more Monsters, Inc, Marvel Comics brings us… Monsters, Inc! The full-color comic book adaptation, that is. The new 2-issue mini-series was adapted by Charles Bazaldua and illustrated by a team of artists from Italy. All of this in anticipation of the 3D re-release of Monsters, Inc — which is, of course, in anticipation of the new Pixar prequel film, Monsters University, which is due next year. (If you haven’t seen it yet, check out the Monsters University “Campus Brochure” that Disney/Pixar have created.) The comic book version of the original Mike and Sully movie, meanwhile, is due in stores this December. 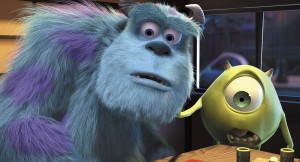