The Return of Captain Carrot — Sort Of…

Our thanks (we think) to EbonyLeopard for pointing this out to us…  In keeping with the current “New 52″ line of re-boots for venerable comic book stories and characters, DC Comics brings us… Captain K’Rot. Yep, it’s Captain Carrot, the 1982 super-funny-animal creation of Roy Thomas and Scott Shaw!, re-imagined as “a borderline psychotic, booze swilling, whore-mongering rabbit” for the new science fiction comic book series Threshold (from Keith Giffen and Tom Raney). Some are saying this is all inspired by the new (and popular) kick-ass version of Rocket Raccoon that has been appearing in Marvel Comics’ Annihilation: Conquest. Others are saying it’s a re-incarnation of good old Bucky O’Hare, created by Larry Hama and Mike Golden back in the 1980′s. Either way, you can decide for yourself. Threshold hits the stands in January, and Captain K’Rot makes his first appearance in issue #3 in March. Read more about it at Comics Alliance, too. 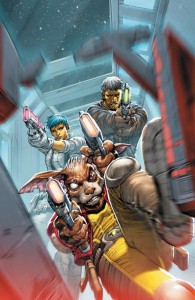 Captain K'Rot sounds reminiscent of Jaxxon, the seven-foot-tall carnivorous green rabbit who was Marvel Comics' replacement for Chewbacca in the original Star Wars comic book after it finished the adaptation of the first movie and had to write new stories to keep going, and Marvel was not allowed to use Chewie for awhile.

I was reading Previews and noticed this title and thought "DC's ripping off the Guardians of the Galaxy." Apparently, I was righter than even I dared imagine. By the way, Marvel is relaunching GotG in January, complete with Rocket Raccoon; the writer is Brian Michael Bendis, the guy who just finished the longest Avengers run in Marvel's history, and just got the X-Men main titles, so Marvel has confidence in this one.

The original series (not counting the alternate future team the team named itself after in a very complex bit of hyper continuity, time travel and what R.R. called "homage taken to 11") ended too soon.