A Little Girl and a Tiger

First off: Merry Christmas! And thank you for making us part of your lives for another year ^^

Also over at Cartoon Brew there’s a teaser trailer for a new short animation project by world-famous animator Andreas Deja. Here’s what they say: “Andreas Deja is a modern-day animation legend. He worked for 30 years at Disney where he was responsible for classic characters such as Gaston in Beauty and the Beast, Jafar in Aladdin, Scar in The Lion King, and Lilo in Lilo and Stitch. He left the studio a couple years ago to focus on personal projects, including producing independent animated films. This morning, Andreas teased audiences with a preview from his short film Mushka, featuring a girl and tiger as the lead characters. The film, which will be animated in a colored pencil style, is ‘a story of love and sacrifice set in Russia.’ On his blog, which also includes development sketches of the characters, Deja pointed out that he still has a long road ahead of him. He’s been working on story and pre-production this year, and plans to animate the film in 2013.” 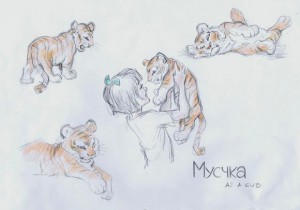