Following in the footsteps of Rise of the Guardians (sorry, we’re just sayin’…) comes Holiday Wars, a new full-color graphic novel coming this April from Th3rd World Studios. Based on the on-line continuing graphic story (written by Scott King and illustrated by Michael Odom), once again we have story where holidays are represented as living, breathing beings. “Holidays reflect the current culture of a society and like a shifting tide they change. Realizing this, The Easter Bunny declared war on the other Holidays in the hopes of gaining the one thing that can guarantee his immortality: The Holiday Spirit. Foreseeing The Bunny’s betrayal, Santa hid The Holiday Spirit and marked Tegan Cassidy, a human infant, granting her the ability to find it. After sixteen years of war, nearly all the Holidays have been killed or have joined The Bunny. Led by Earth Day, the rag tag group of observances still fighting, turn to a now teenage Tegan in the hopes that she can lead them to The Holiday Spirit.” Pre-order information for the trade paperback is up on Amazon. 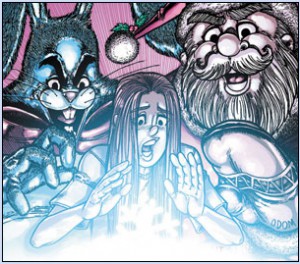