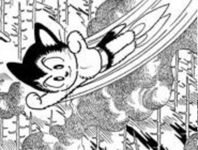 The original Japanese title is "Atom Cat", with "A Tomcat" a pun used once or twice. It looks like the American publishers have made the pun the main title. Sort of like how the American producers of "Pocket Monsters" have turned the Japanese slang title for it, "Pokémon", into the official title.