The Elephant Men are Back

Image Comics have announced that the popular first hardcover volume of Richard Starkings’ popular Elephantmen comic book collection will soon be back in print — now in a new Revised and Expanded edition called Wounded Animals. It includes the original “Issue Zero” (with art by Ladronn), a sketch section, a new introduction, and more. Extreme noir science fiction with uplifted animals fighting against and alongside humans for world domination. Hey, the creators insist that it’s not Furry. Check it out and decide for yourself. The new edition (collecting issues 0 – 7) comes back to shelves on May 1st. 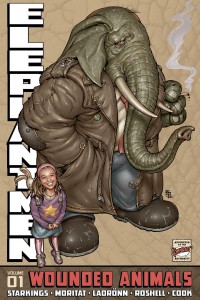