When Bears Take Over

Jojo Gould is a Scottish writer who has only recently come across furry fandom — just in time for him to write a very furry series of books! The first of which happens to be available at Amazon as a Kindle download. “This is he introductory book in the New Bears for the 21st Century series. In a future where humans are no more, bears have evolved as the planet’s master species. The Bear in a Safari Hat is your first humorous pawstep into that new magical world. Starting off in an almost fairy tale style, the story then unfolds as the characters emerge (think somewhere between Winnie-the-Pooh and Planet of the Apes). The Bear in a Safari Hat is the first part in a series of volumes. This is a coming-of-age serial release for young-at-heart adults and intelligent youth alike.” 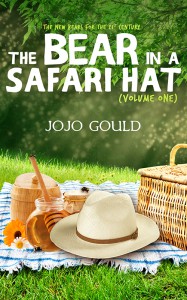